91 companies and organisations in the UK were supported by Creative Europe last year, receiving 10% of the scheme’s total funds. 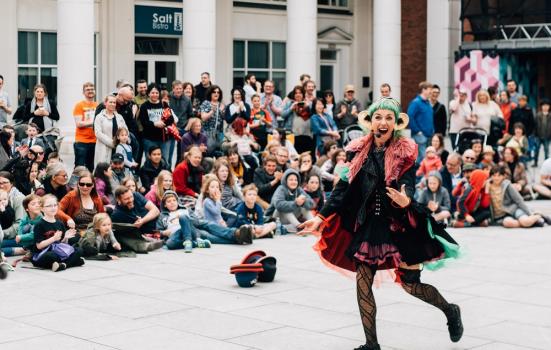 Festival of Fools in Belfast, part of a partnership supported by Creative Europe

Grants from Creative Europe, the EU’s cultural funding framework, are worth an average of €18.4m (£16.4m) a year to the cultural and audio-visual sectors in the UK, according to new research.

Reports published last week by Creative Europe find that 91 companies and organisations in the UK were supported through Creative Europe’s various strands last year, receiving a total of €16.6m – 10% of the scheme’s total funds.

Activities supported by Creative Europe include collaborative projects, platforms supporting the international promotion of new talent, literary translation, and the production and distribution of film.

Organisational growth is the most commonly cited benefit of funding, but the reports also find that participation encourages improved networking, a bigger international reach, and more developed digital capacities.

The research comes as the European Union (EU) is consulting on the future of its cultural funding scheme, and follows the UK’s publication of a wish list regarding its future relationship with the EU.

Investment and support through Creative Europe are found to “significantly” boost capacity for successful organisations, which are often small. 82% of the beneficiaries consulted by Creative Europe said that their funding had been effective in growing their business or organisation, and the majority said they had developed better relationships with funders in the UK as a result of participation.

The fund also helps develop international links. 34 UK-based arts organisations were supported through Europe-wide partnership projects last year, with total funding of €3.2m. The report says that the UK is “one of the best-networked countries in Creative Europe”, with 734 partners across 34 countries in the fund’s culture sub-programme.

The reports also conclude that Creative Europe is a support mechanism that “goes well beyond monetary grants” with impacts including expanded access to audiences and improved skills.

Identifying the wider benefits of participation in the programme, particularly on innovation, skills and capacity, and social impact, was a key aim of the research.

The fund is credited with helping organisations become more resilient by boosting job creation, output and exports, resulting in additional investment. The report also says that the requirement for funded organisations to seek out match funding has “more than doubled” the funding received by UK organisations.

In addition, the report says that the programme has helped UK organisations:

Keith Hamilton, Finance Director of Fools Festival in Belfast – now part of a £200k cooperation project that connects the festival with street theatre organisations in Italy, Spain, Germany and Poland – told AP that participation in Creative Europe helps improve the quality and reputation of the organisation’s work.

“The project allows us to access higher-level training for our performers, so we need partners abroad. In Northern Ireland we’ve been isolated, in a sense, and street arts have been used as a way of filling our streets with people from all different communities.

“The European funding also shows the festival is not just local – it’s internationally renowned and connected to five nations.”

He continued: “We are quite worried about the impact of Brexit and how that could restrict the really strong relationships we’ve developed internationally.

“If we didn’t have access to this type of funding any more it would knock the heart out of you.”

This is the last time the annual data will be produced before the UK officially leaves the European Union in March 2019.

As such, the report’s authors urge the Department for Digital, Culture, Media and Sport, and the Treasury, to take the findings into account “when considering the future of the UK’s participation in the Creative Europe programme, as part of a wider Brexit settlement for the UK”. A recent Government White Paper proposes ongoing participation in programmes such as Creative Europe.

The report’s timing also comes as the EU is consulting on the next iteration of the Creative Europe programme, which is due to close in 2020. Current proposals include a €400m increase in the budget (27%), which would take EU support for the cultural sector up to €1.9bn for 2021-27.

For this reason, the authors recommend further research on the impacts of Creative Europe. Similarly, they call for greater evaluation support and training to beneficiary organisations before their projects begin, to encourage better reporting on the impacts of any future programmes.