Cost of The Factory could rise beyond £130m

As Manchester City Council races to get the venue finished for 2021, only a third of construction packages have been awarded. 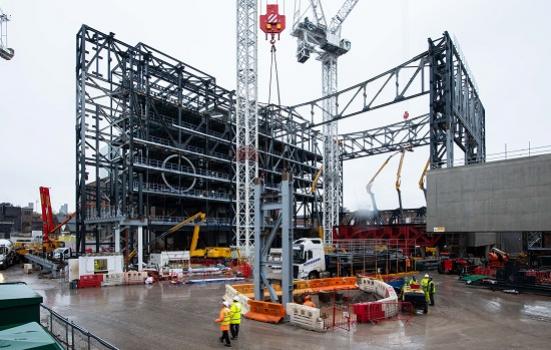 The current state of construction of The Factory, Manchester
Photo:

The cost of The Factory arts venue in Manchester could rise again despite the project already exceeding its budget by £19m.

Manchester City Council (MCC) trumpeted a “major construction milestone” last week – the installation of a 125-tonne steel theatre framework. But councillors have been told that of the 32 construction packages for the building, only 11 have been contracted out. The 5000-person capacity auditorium and exhibition space is meant to be completed in time for Manchester International Festival (MIF) in July 2021.

Director of Capital Programmes Jared Allen told a recent committee meeting that the complexity of the £130m glass cube building means it is struggling to attract contractors: “The Manchester market is very, very hot at the moment”.

“Because of the unique nature of its design and the complexity, we’re finding the supply chain isn’t as deep as in other areas, particularly the commercial and residential [markets].

“We are seeing increasing pressures on the budget but we are monitoring them very, very closely.”

Allen also noted a £4.1m contingency budget is “under pressure”, meaning any further cost overruns could be problematic.

The Factory is among several recent arts capital projects to face financial and planning troubles. Aberdeen Art Gallery reopened earlier this month years late and millions of pounds over budget, the Olympic Park cultural quarter is highly likely to be delayed, and Croydon taxpayers will foot the bill for an overspend on the Fairfield Halls redevelopment.

Asked whether the council will have to inject further funding into the project, Allen said he “can’t give an absolute iron-clad guarantee” that this won’t be needed.

The project has already experienced cost overruns because works to meet acoustic standards were not planned in enough detail when the original £111m budget was set and construction price inflation has been unexpectedly high. Contamination and the discovery of two drains coming onto The Factory site have delayed the build. Allen said the council asked property developers Allied London to absorb some of the cost associated with the drainage complication. A spokesperson for MCC denied this was the case and has not responded to AP’s further questions about the sum requested.

The Factory is intended to provide Manchester with “a genuine cultural counterbalance to London,” according to previous statements by Council Leader Sir Richard Leese.

It is expected to support more than 1500 jobs and £867m of economic growth over the next 10 years. “The presence of The Factory as a ‘cultural anchor’ has already had a catalytic effect in terms of supporting the creative redevelopment of the Science and Industry Museum,” according to a recent council report.

The council has also claimed that “already The Factory is making a difference to the lives of local people” through The Factory Academy, a creative industries training and apprenticeship programme.

But Councillor Sarah Russell said at the committee meeting that the council had not been provided with any information about the gender breakdown or ethnic background of the apprentices, “which is something we found the Town Hall [restoration] could have been doing a lot better on”.

“I think it raises significant questions about lots of things that are outside the financial monitoring, which also gives me some cause for concern.”

MCC's spokesperson said the diversity of apprentices will be reported back to council soon.