Compact to secure Liverpool as 'UK's second City of Culture'

Liverpool has a new five-year strategy to reboot the region by building a more inclusive coalition from its creative workforce, which is now believed to be twice as large as official figures suggest. 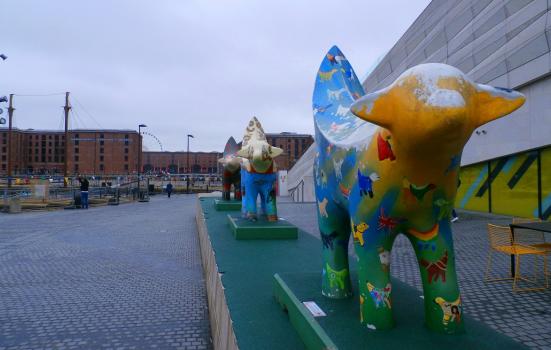 Superlambanana, mascot of Liverpool City of Culture, outside the Museum of Liverpool
Photo:

A five-year cultural strategy aims to position Liverpool as a leader in cultural and creative pursuits through greater inclusion and community leadership.

By promoting its arts and cultural sector as a social and economic resource, Liverpool will shore up its status as "the UK's second City of Culture," according to Phil Redmond, Co-Chair of the cultural partnership responsible for the document.

A review of of the partnership's role, membership and governance is now under way, one of several initiatives forming an an urgent programme of work to address the impacts of Covid-19.

This will include a potential new cultural recovery growth fund by the autumn, up to £1m worth of Kickstart job placements for young people and plans to "champion implementation" of a £150,000 music industry sector development pilot, which funding was approved for in May.

Liverpool City Region Combined Authority has already has a pioneering 1% for Culture scheme, assuring at least that much of its £30m budget for culture, as well as a borough of culture programme that together provide "a spine for development," the strategy says.

Redmond noted the inevitable challenges to rebooting the cultural sector but pointed to the "new horizon" of digital acceleration.

Metro Mayor Steve Rotheram commented: "We are going to need our cultural and creative sector more than ever as we start to emerge from lockdown."

Liverpool's creative workforce is twice as large as official records suggest when freelancers are accounted for, the strategy says.

Analysis of LinkedIn data pitched the city region's creative workforce at about 24,000 people compared to 13,000 in the latest Office for National Statistics figures from 2018, which counted just 3,000 people not working full time in the sector.

Liverpool has a higher proportion of creative freelancers than other regions and its creative economy is heavily dependent on live performances and seasonal events, a model that will likely cause difficulties as it emerges from lockdown.

It also faces challenges around underemployment in many creative occupations - fewer people have Level 4+ skills than in other regions - poor broadband in many parts of the city, and a lack of larger commissioning organisations and sector employers.

Low levels of research and development have caused "a deficiency in intellectual property... and a resulting over-dependency on revenue derived from commoditised services and footfall-related activities".

"Even before Covid, Liverpool city region suffered a productivity gap between itself and other regions, which was reflected in the output of its creative economy," the strategy says.

"It also reflects a failure to address opportunities to exploit culture as a means to promote and drive inclusive growth."

The document highlights efforts by its music hubs to ensure all schoolchildren have the opportunity to learn an instrument: "That programme needs to be extended and replicated across the creative sector if Liverpool city region is to equip the next generation with the creative, technical and business skills that will be required."

The cultural partnership will work alongside sector bodies like Creative & Cultural Skills, Creative England and Arts Council England to achieve these changes.

The first tenet leans into the Black Lives Matter movement, championing community-led transformation through a more inclusive coalition of voices.

The cultural compact will promote investment in assets that amplify Liverpool's cultural strengths, rather than seeking funding to address its weaknesses.

'Creative people' focuses on transitioning its creative economy from reliance on short-term funded projects to more diversified revenue streams, shifting the balance of income away from attendance at live events towards filmed and streamed work, for example.

The strategy says a culture-led response to the Covid-19 economic emergency "is the one most likely to be transformational and result in new ways of doing things – not just in arts, culture and heritage, but in health, education, safety and environment".

"This is both the immediate response to crisis and the strategic best option."

The final tenet, 'Creative Places', recognises how changes to the public realm have mitigated the effect of Covid-19 on hospitality.

Applying this approach to public performances could both provide a Covid-safe option for the theatre and music industries and "further reinforce the image of Liverpool city region as the most adaptable and flexible region in terms of hosting public events".

The cultural partnership will work with city development agency Culture Liverpool to deliver a region-wide placemaking programme similar to The Somewhere Project.