Commission to improve diversity of London's statues and streets

The newly-launched inquiry into diversity in the capital's public realm will be guided by Black cultural groups and Arts Council England. 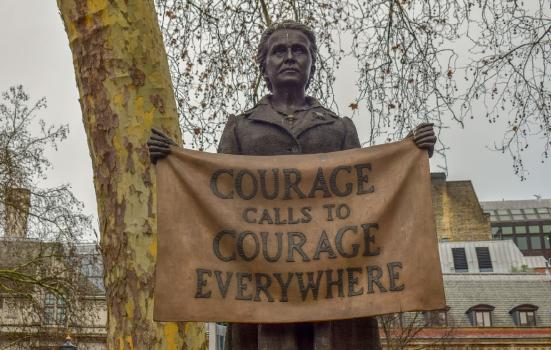 A statue of suffragist Millicent Fawcett at parliament
Photo:

A new commission will consider whether statues, street names and public artworks in London should be removed or given historical context.

The Commission for Diversity in the Public Realm will help "tell the full story of our history," Mayor Sadiq Khan says.

While the representation of women, disabled people and the LGBT community are up for discussion, the commission is clearly influenced by the Black Lives Matter movement and recent debates over public monuments.

Launched on Tuesday, it aims to provide an overview of the city's existing largely Victorian public memorials and make recommendations on new statues, murals and street art, among other public works.

"For too long our public spaces have neglected the achievements of many in our city," Khan said.

"The range of people immortalised in our statues, memorials and buildings have left a restricted view of the past that fails to show our capital’s great diversity. It’s time for this to change."

The commission will also develop guidelines for future commissions and advice on "how to assess, evaluate and approach contested heritage,  including making recommendations for the addition of context to exisiting works, or their removal".

Up to 15 independent members will be sought to join a board of partners that already features Arts Council England, Historic England, Black Cultural Archives, and Black-led visual arts organisation Iniva.

Iniva Artistic Director Sepake Angiama said the organisation will share its expertise on making public spaces "better reflect the rich and diverse culture in an open dialogue with artists and the wider public".

This is not the first investigation into improving the diversity of London's heritage: a 2005 Mayor's Commission on African and Asian Heritage found the city's heritage organisations and collections needed to be more "relevant, vibrant and accessible" to Black, Asian and minority ethnic communities.

There was also a need to develop strategies for preserving these communities' heritage, the 2005 commission said.

The Mayor of London's Office said that Khan and his senior team "have held discussions with council, community and arts leaders ... to assess the best way to improve diversity in the public realm" since 2018, when Khan voiced his support for a statue of suffragist Millicent Fawcett outside parliament.

ArtsProfessional has asked the Mayor's office to explain what these discussions have achieved in the last three years.

An explanation had not yet been given by the time this article was published.