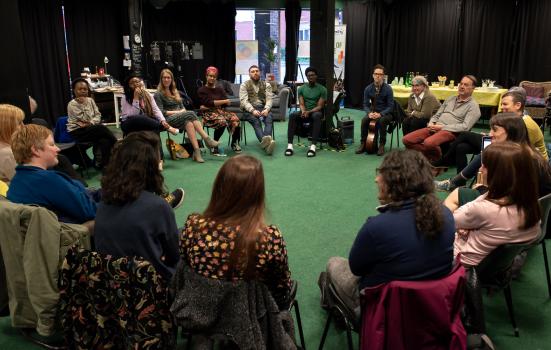 A citizen's assembly will shape the future of arts in Coventry by influencing the city's cultural strategy and deciding projects for its City of Culture programme.

Art for the People is believed to be the first citizen's assembly on arts and culture anywhere in the world.

About 15,000 randomly selected households will receive letters this week inviting them to take part; 50 people will then be selected to form the assembly next month.

Participants will call upon and hear from experts in various sectors to answer a central question: how will arts, culture and creativity shape a better future for Coventry?

General Manager Philippa Cross said the aim is to attract "the ordinary people of the city" who would not normally volunteer, or who might be "cynical" about the impact arts can have, before handing over as much control as possible.

"There will be people who are already engaged with the arts but also, we're hoping, some who aren't.

"It's a tiny bit scary but actually quite exciting... it feels like something that a City of Culture is really about."

Citizen's assemblies have long been mooted as a way to directly engage communities in more participatory decision making.

In Coventry, The Sortition Foundation, a not-for-profit recuriter, will select a random yet representative sample of city residents for the assembly.

Assembly members will be paid £300 for six weekdays and one full weekend session. There is a budget for childcare, transport costs and technology.

Other residents of Coventry can also submit their input online.

"People say it's costly and it is - if you don't care about the community. There's a lot more money wasted in the public sector on what public officials want," says Susan Ritchie, Director of Mutual Gain, which specialises in promoting active citizenship.

The assembly can call on any of a nine-person panel of experts - academics, local practitioners, social change leaders and educators - to help form their views.

Once 80% members agree on something, it becomes a firm recommendation to Talking Birds and the city council. If either is going to turn down a recommendation, they must explain why.

However, Ritchie thinks the suggestions for Coventry are unlikely to be rejected: "You wouldn't really do this if you didn't want to take them on."

There are other models for citizen's assemblies: France held on climate change across 2019 and 2020 and Northern Ireland conducted one on social care in 2018.

Ritchie said this assembly is likely to differ significantly from its predecessors, which focussed on "heavy" subjects.

"Whilst arts and culture is controversial, it's not always the top of people's list to talk about.

"I think working with creative people means they better understand really the time needed to connect. What I'm looking forward to is seeing what creativity the assembly members bring with them [to the process]."

Cross said it was important to have "something we could put into practice" rather than sinply passing recommendations on to the council.

"It's an opportunity to reach people who haven't thought about what a city of culture could be."

Ritchie agreed: "It builds that social capital, it gets those conversations happening, and it gives the commissioning organisations something more solid than a wishlist."