Children across England to test arts-based learning in £2.5m trial

Five projects will take place across 400 schools, focusing on drama, music and writing to improve academic and social performance, but concerns remain about the possible research outcomes. 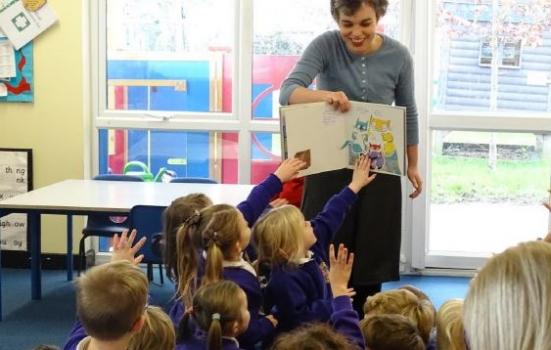 Author Viviane Schwarz taking part in The Power of Pictures, one of the five trials
Photo:

Children across England will take part in a £2.5m trial to test the impact of a series of art interventions on their academic and non-cognitive development.

Dubbed the UK’s “largest ever study of cultural learning”, the Royal Society of Arts (RSA) programme, ‘Learning About Culture’, will start in September 2018 and take place in 400 state primary schools with a “significant proportion of pupil-premium-eligible students”.

A combined 8,500 children will take part in five arts-based projects, including:

The study will conduct randomised controlled trials with parallel ‘deep-dive’ research in schools.

Writing about the programme, Matthew Taylor, Chief Executive at RSA, said: “Learning About Culture must aim to lay the foundations for a new national commitment to arts and cultural education for all children, one that does not single out policy-makers as the mechanism for change, but in which we all find opportunities to strengthen the system.”

He continued: “We know system change is necessary, but we need to be open minded in identifying where in the system the most promising openings for change will emerge.”

The new programme intends to fill an identified ‘evidence gap’ about the impact of cultural learning techniques – a conclusion reached based on a literature review that overlooked Creative Partnerships, a £380m government-funded programme. It also aims to improve the way evidence of effective approaches is used by practitioners in schools and the cultural sector.

Mark Londesborough, Associate Director, Creative Learning and Development at RSA, added: “In order to ensure that our research could make a difference to children, we would need to find out how to increase capacity in the sector for turning evidence into effective practice; to move away from using evidence primarily as a tool for advocacy, to seeing it as a tool for self-improvement.”

The programme will seek to provide evidence of the difference the activities make to children’s academic achievement and non-cognitive skills, as well as how different projects can be implemented effectively, and how engaging in activity with cultural providers develops schools’ arts and cultural offer.

Although the RSA plans to conduct additional research – including subsequent studies with schools that benefitted the most and the least from the projects – concerns remain about the capacity for the trials to prove educational outcomes.

Professor Pat Thomson, the lead author on a review of research about Creative Partnerships, told AP: “People shouldn’t think this research would provide the definitive answer. It will provide some answers, but there are other forms of research that must be used too.”

She said Learning About Culture will cover some new ground and has a bigger sample size than most other arts education research, but she expressed doubts about the potential for the project to prove an impact on academic attainment, given that it takes place over a relatively short time period in very complex school environments.

These concerns have played out in similar research projects before, such as The Arvon Foundation’s two-year initiative pairing teachers with professional writers, which found the method was a “valuable way” to enhance student achievement in writing but statistical data “did not however reveal enhanced attainment”.

She continued: “At a time when arts enrolment is dropping, and when further evidence about the elitist nature of arts employment is on the rise, is this the most strategic research that could be funded with £2.5m?”