Drama schools are being urged to axe "absurd" fees for virtual and self-taped auditions to protect diversity in the theatre industry. 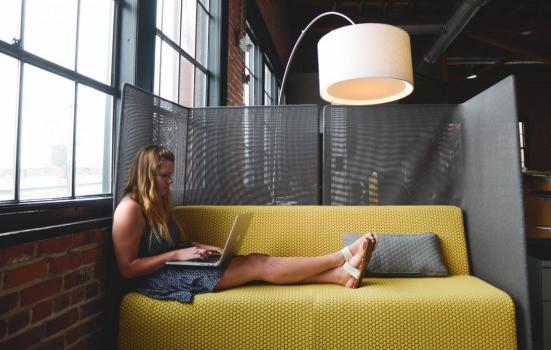 What are aspiring actors who audition online paying fees for?

Drama schools are facing pressure to provide "temporary amnesty" on audition fees during the pandemic.

Fees for self-taped and virtual auditions can be as high as £55, leading critics to question what's actually being paid for.

Although many schools have cut audition fees or started waiver programmes in recent years, those leading the charge say such measures fall short in a time of financial distress for many families.

They say the cost exacerbates the class divide in British theatre by restricting entry to those who can afford audition fees - often for several schools - or navigate the needs-based assessments to qualify for waivers.

Theatre maker and writer Ben Weatherill has written to all UK drama school principals asking them to value students' potential above their profitability. He is yet to receive any responses.

"This is a really easy fix for them," he told ArtsProfessional.

"We should be striving for a permanent reduction and I think we are heading in that direction. It's right to ask for a temporary amnesty; then they can build [fees] back up from there."

Theatre education specialist Carl Woodward is also lobbying schools to change their practices during the pandemic. On Wednesday, he launched a crowdfunding campaign to pay the "absurd" charges for prospective students.

"To return the theatre to health, we need more class diversity among the 2021 intake," he wrote.

"Many talented working-class actors and technicians are prevented from even beginning a career on the stage due to course fees, let alone paying for the privilege of auditioning virtually during the biggest recession in 300 years."

"I was appalled that these kids are being asked to pay not just for the experience of an audition but to submit self tapes with no indication of whether they did well or not.

"There are a lot of students and young people who are feeling disempowered by this."

A few institutions, including the Musical Theatre Academy and Manchester School of Theatre, have free auditions.

However, most schools' websites show they intend to continue charging for online auditions and recorded applications.

Submitting a recorded audition to the Royal Conservatoire of Scotland costs £55 per course.

Oxford School of Drama, Urdang, Italia Conti, and the MA Acting and MA Musical Theatre Courses at Guildhall School of Acting (GSA) have a £45 audition fee.

The Royal Central School of Speech's fee is £40, the Royal Welsh College of Music and Performance Preparation Academy charge £35, and RADA's fee is £34.

On the lower end, East 15 charges £15 for a first round audition. Bristol Old Vic's application fee is £25; London School of Musical Theatre's is £10.

Other schools increase their fees further into the audition process.

Mountview's hits £45 at the recall stage (£20 for the online audition). LAMDA charges £12 for a self-taped first round audition, nothing for round two, and £36 for a final recall.

GSA and ArtsEd raise their fees from £15 at the first stage to £30 at stage two.

Rose Bruford isn't charging for an initial video audition but other stages will cost £25 to £55, pending the potential for on-campus auditions in spring.

"It just screams 'how much can we get away with', and right now I just don't think it's appropriate."

People have taken to Twitter to debate the merit of online audition fees or defend institutions' need to charge them.

While some were outraged about the cost - Sharon Garcia said she paid £250 for her children's auditions this year - others argued the audition judges need to be paid.

"If it's a self-tape the fee should be reduced but someone still needs to watch the tapes," Actor Shereena Glean tweeted.

"The money shows your [sic] serious... it's prep for the real world."

The University and Colleges Admissions Service (UCAS) is charging £26 for applications to its conservatoires in 2021. While schools sometimes collect this on behalf of UCAS, it is separate to the audition fee.

A UCAS spokesperson was unable to confirm on Wednesday whether it charges the schools any fees they might be passing on to auditioning students.

According to the Federation of Drama Schools (FDS), audition fees pay for "staff and facilities associated with the audition process".

"For many schools this includes extensive outreach work to geographically, culturally or economically challenged areas."

The audition process at member schools aims to be "cost effective, informative, useful and fair," the federation notes.

LAMDA, which cut the cost of its audition fee by 75% last year, says: "We know that high audition fees are a barrier to accessing drama training."

"We anticipate that we will receive in excess of 4,500 self-tapes this year, incurring a significant outlay for a small institution in terms of processing and administrative costs."

About 400 applicants will be invited to a recall audition costing £36. The institution hopes to hold these in person in spring.

But even if they must happen online, auditioners will work with six practitioners, "experiencing a full day at LAMDA," the school says.