Call for orchestras to act on disability

A report says “radical, bold action and a sense of collective responsibility” are needed to transform inclusion practices in the arts sector. 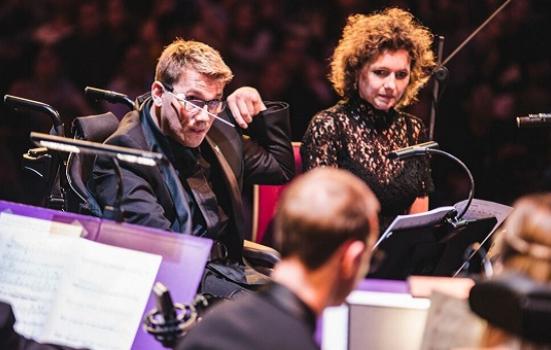 Bournemouth Symphony Orchestra (BSO) is calling on other orchestras to employ disabled musicians and embed disability awareness in their organisations, after overhauling its own approach to accessibility.

The organisation is offering a cultural change programme for businesses, created following an 18-month programme that led it putting inclusion “at the heart of the orchestra”.

An external evaluation by music support organisation Sound Connections said the company was “a different place to work as a result of their Change Makers programme and there are very tangible, practical actions and commitments that have led to this change”.

“It is now time for the BSO to share its learning and collaborate with other orchestras and organisations to inspire change across the sector, nationally and internationally,” the report said.

“This is an exciting time ripe with potential but harnessing the possibilities needs radical, bold action and a sense of collective responsibility amongst everyone who has the power to make change in big and small ways.”

“I believe there is a nervousness in business about looking at a certain areas of inclusion because of the language you use,” he said, noting they did not know what terminology to use when referring to disabled people and issues.

“One of the many things we have learned is that it’s about small steps … Unless you start, you’re never going to get anywhere.”

Sound Connections’ report said “practical everyday changes have taken place in every part of the organisation”.

These included providing disability equality training to all its employees and creating ‘diversity champions’ to advocate for change.

The orchestra now plans to scale this approach to businesses that take part in its cultural change programme. Senior leaders will evaluate the appetite for change within their organisations and learn how to gain the support of board members and stakeholders to create and implement inclusive practices.

The report says that BSO Resound has become a part of the company – “not a separate entity”.

“BSO Resound must always maintain the same artistic standards and aspirations as the orchestra’s other ensembles,” it says.

Scarfe said Resound, which performed 22 concerts within its first eight months, means the orchestra now has disabled role models and is “more reflective of the society in which we live and in which our audiences live”.

He said this helped the organisation attract new talent: “We know that there are people who have applied [auditioned] for things here who wouldn’t have applied before because they know now that the BSO is inclusive.”

But there are still barriers to wider acceptance: while there was “overwhelming support” for inclusion and inclusive events, the report said there was a need to raise public awareness about the social model of disability – the idea that people are disabled by their environments rather than their bodies.

“Some people still feel there is only so far you can go with including disabled musicians in professional ensembles and that there are some disabilities that mean people won’t be able to play to a high enough standard,” says the report.

Scarfe said BSO will continue to look at ways to make its recruitment and audition processes more accessible.

The report says the organisation still faces challenges around accessibility. The “significant physical barrier” of a lack of disabled access to its administrative office is a concern that Scarfe is addressing.

He said the orchestra always planned to share what it learned from the Change Makers programme, but did not expect it to be “such an extraordinary and brilliant experience”.

“This has been the most hugely positive thing for us, and that in itself speaks volumes about the importance of it. That’s why I’m so passionate about getting other businesses involved; I feel that we have a responsibility to want to encourage other people to take that journey.”