A national arts charity has criticised threats to revoke funding to museums, saying 60% already fear they won't survive the pandemic. 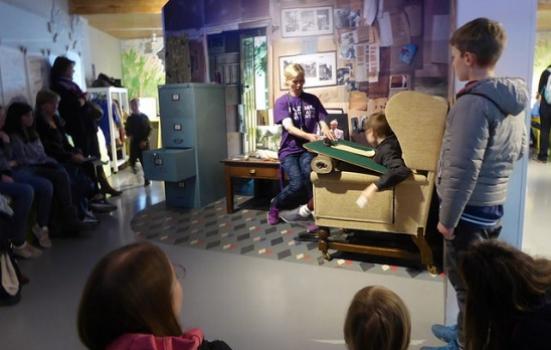 Roald Dahl Museum in Great Missenden is one of the beneficiaries of the £2.25m Art Fund grants
Photo:

A national charity for the arts says the Government must "respect" museums' independence on issues of contested heritage as they fight for their survival.

"Secretary of State Oliver Dowden MP recognised that statues and historical objects 'play an important role in teaching us about our past, with all its faults' and 'we should seek to contextualise or reinterpret them in a way that enables the public to learn about them in their entirety,'" a statement from Art Fund this week said.

"We see many museums doing this, as they have always adapted to new and emerging issues, and we are proud to support museums and curators doing this important work through many of our funding programmes."

The organisation has put its foot down as it publishes new research indicating 60% of museums may not survive the pandemic. More than 160 of its 800 museum partners have been unable to open since the first lockdown, Art Fund says.

While visitor numbers for DCMS sponsored sites were trending up again at the end of October - 10 sites welcomed about a third their usual cohort for that time of year - the count stopped on November 4 as England went back into lockdown.

Art Fund's research, which found 77% of museums, galleries and historic houses have taken a 'significant or severe' hit to their income, reveals an urgent need for support.

About half (55%) of the 2500 museums in the UK have recieved emergency funding - and 56% of those would have gone under without it.

Since April, Art Fund has receive applications for financial assistance totalling nearly £17m for a £2.25m fund. Only 17% of applicants could be supported.

It has launched a £1m fundraising camapign Together for Museums in response. At the time of publishing, 314 donors had contributed nearly £276,800.

Director Jenny Waldman said it had been "hugely inspiring to see innovative ideas from museums to adapt and evolve" over the past six months.

"But [it is] heartbreaking that we cannot support them all. This terrible pandemic ... has taken museums to a make-or-break point."

"Sadly, reopening alone is not a smooth path back to sustainability as museums face tough challenges to adapt what they can offer to visitors in person or online."

Of museums that have yet to reopen, only a third expect to do so in the coming months, Art Fund's survey showed.

Nearly two thirds (61%) of museum and gallery workers are worried they will lose their job.