Cabotage crisis: Orchestras may be forced to tour illegally

The Association of British Orchestras says there are three options moving forward: a new deal with the EU, financial support from the Government, or touring against the law. 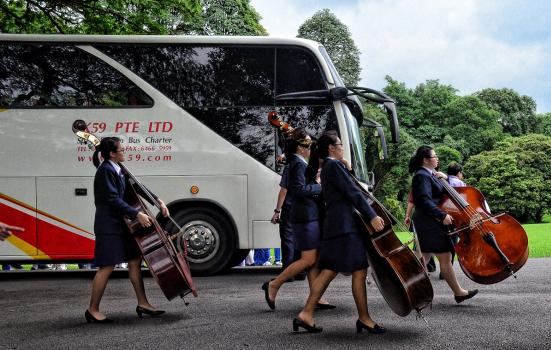 Orchestras may be forced to tour illegally if a solution to the cabotage crisis cannot be found, a leading industry body says.

Mark Pemberton, Chief Executive of the Association of British Orchestras (ABO), says the barriers to touring in the EU erected by new road haulage limits have only three potential solutions.

The first is a new deal with the EU; the second is financial assistance from the UK Government to tour to the extent they are able.

"There is another option, which is to break the law," Pemberton said.

Tours in the EU have long been subject to cabotage - the rules just weren't often enforced. Now, UK trucks and tour buses can only make up to three international movements before returning home within seven days.

"The ABO cannot tell its members to break the law but some may feel they have no other option," Pemberton added.

Stephen Maddock, Chief Executive of the City of Birmingham Symphony Orchestra (CBSO), said trying to tour illegally would present too much of a risk, especially for companies with branded trucks and UK plates.

"You're running the risk of having your instruments confiscated... there's very little leeway for things to go wrong."

But he agreed UK orchestras have been left with few options but to appeal to negotiators for an elusive new deal.

"The reality of how the bureaucrats think of these things makes it seem very likely they won't make any exceptions for us."

Pemberton said he took part in a "very depressing" meeting with European Commission last month in which UK officials were told post-Brexit cabotage restrictions were not going to change.

The ABO has brought the Road Haulage Association onside to help argue its case for a 'cultural easement' for orchestras that operate their own vehicles. A section in the Brexit trade deal on liberalised transport already exempts owner-operators from driver permits but not from cabotage.

"One of the things we're hearing quite clearly is that the Government is not willing to put its hand in their pockets to help these sectors."

Hundreds of thousands of pounds will be lost from concert touring if a solution can't be found, he added.

Pemberton agreed: "They [orchestras] literally don't know how they will fill the engagements that they have a contract to do."

Maddock said the CBSO is "fully committed" to a nine-concert tour in May, having already cancelled six international engagements in the past year.

"If a sesnsible solution can't be found [before then], we will have to find some money and do the tour at a loss, I guess."

Pemberton says "there is a workaround but we don't like it" - using an EU registered operator.

"This is assuming there are the specialist hauliers available," he said, noting the biggest German haulier recently went bust.

"Effectively we're shutting down UK companies and replacing them with EU companies."

McKenzie, of the Road Haulage Association, said there are already some rock and pop music event operators looking to do exactly that.

In its letter to Johnson, the association argued it is one of the only paths forward, asking for grants for hauliers to create "bridgehead" operations with EU member states: "This would give them the ‘last resort’ option of registering their trucks with EU licence plates."

This would allow orchestras to do unlimited cross-border trips - at enormous expense.

Maddock said the CBSO, which owns a quarter-million pound vehicle, can either bring a European truck to Birmingham or take its own truck to the first concert destination and unload into an EU-registered one.

The extra time and cost this presents will prove prohibitive, he said.

"We might only be talking about less than £100,000 making the difference between [a tour] being viable or not."