A worldwide study of the secondary art market reveals that "while the average John Smith makes it into auction, the average Jane Smith does not". 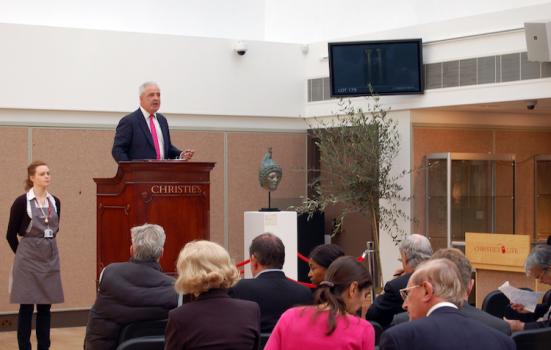 Women artists attract higher prices for their work but sell much less of it than men do
Photo:

Female artists are massively underrepresented in the global secondary art market, with less than 4% of artworks sold at auction between 2000 and 2017 attributed to women.

The top 42 most expensive artists at auction are all men, representing 0.03 per cent of the market but 40% of the total sales value.

The findings are part of an international study published in the Journal of Cultural Economics, carried out by researchers at Australia's Monash University, Maastricht University in the Netherlands and Artnet Worldwide, New York City.

Dr Marina Gertsberg, study co-author and Lecturer in Banking and Finance in the Monash Business School, said  women might “feel discouraged by their market prospects at the very top”.

The data suggests female artists might also “experience discrimination by dealers and buyers who ascribe higher potential to men," she added.

These include the UK-founded global brands Sotheby’s and Christie’s, as well as international art auctioneers such as Poly International, Phillips and the Beijing-based China Guardian.

While male artists dominate the secondary market, the study found that on average art by female artists attracts a higher price.

While this higher average price may suggest that “buyers perceive quality of artworks by female artists as higher than the artworks of male artists”, Gertsberg said, it is more likely it indicates the barriers women face in the art world.

“We would not expect this difference in quality if men and women faced the same difficulty in entering the market.

“The higher average prices for female artists tell us that only the best (highest quality) make it into the auction market, which seems not to be the case for male artists.

She added that, while it may seem counter-intuitive, “we would like to see the average price for artworks produced by women fall to the level of men".

"This would imply that the quality of male and female artists is similar and suggest that the playing field is more equal.”

Most sales at auction are works by deceased artists. As such, sales data reflects historic trends in the art world as well as contemporary issues of gender inequality.

Pablo Picasso tops the list for the period studied in the report, with sales of US$5.85bn. The next highest ranked artist is Andy Warhol, followed by Claude Monet.

The only female artist in the top 50 is American abstract painter Joan Mitchell, who died in 1992.

Gertsberg said sales of artworks by British female artists were higher than the average at 5.8%. However, as the data reflects the nationality of the artist rather than the location of sale, the gender balance is not necessarily better at auction houses in the UK.

The sculptor Barbara Hepworth is the highest-placed British female artist, with 616 sales totalling US$135m. In contrast, her male contemporary Henry Moore sold 4350 artworks with a combined value of US$624m.

The study comes at a time of increasing focus on gender disparity in the art market and in the contemporary art world.

An annual research report published by the Freelands Foundation last November found that 86% of the lots at Sotheby’s contemporary art evening sales in 2019 were works by male artists. In 2018 and 2019, only 3% of the top highest grossing sales were works by female artists.

The report also revealed only 35% of artists represented by commercial galleries in London were women.

While male artists continue to dominate the secondary market and the rosters of commercial galleries, the number of women studying art at degree and postgraduate level has continued to grow to 66% of creative arts and design students.

Gertsberg said: “Overall, our study shows that women can compete side-by-side with men if one lets them."

"As a next step, it is important to identify where the barriers are that prohibit women from entering that competition.”