Arts Council England’s national portfolio spend will be £27 per head in the North for 2018-22, compared with more than £71 in London, IPPR North has calculated. 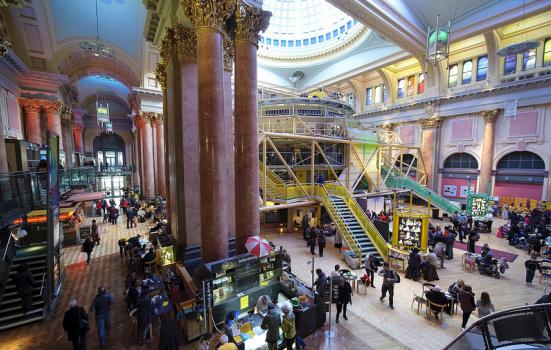 University of Salford via VisualHunt.com / CC BY

Arts in the North of England are underfunded by £691m compared with the capital, think tank IPPR North has claimed.

It is calling for “fresh billions” to be invested in the region to truly drive change, and has criticised the Government’s presentation of a £15m cultural legacy fund for the North as new, given it was first announced in 2015.

“Culture is more than a nice-to-have, it’s a key driver of economic prosperity, attracting and retaining high-skilled workers and providing jobs for many thousands,” said Luke Raikes, Senior Research Fellow at IPPR North.

“The North has a range of talent and cultural assets that the government consistently fails to support in the same way as London.”

The figures are based on IPPR North’s analysis of Arts Council England’s (ACE) planned national portfolio spending for 2018-22. It finds the North will receive £27 per head during the funding period, compared with more than £71 per head in London.

IPPR North estimates that if ACE granted the same amount of spending per capita to national portfolio organisations in the North as it will to London-based organisations during the 2018-22 funding round, an additional £691m would be spent in the North over the four years.

The IPPR North analysis follows a report last year by GPS Culture, which found efforts by ACE to rebalance cultural funding across England were only a “token in the face of the scale of the challenge”. It calculated the benefit to Londoners of funding for national cultural institutions, including NPOs, was £65.18 per head, compared with under £5 per head outside the capital.

Reacting to IPPR North’s analysis, a spokesperson for ACE said the funder is “actively addressing the important challenge of increasing investment outside London”.

ACE is aiming to spend 75% of Lottery funds outside of London by 2018 and will invest an additional £170m outside London in its next national portfolio, including support for 51 new organisations in the North of England.

They added: “We want to build capacity outside the capital – enabling more artists and organisations to do exciting work across our cities, towns and villages. We must do this without damaging London’s cultural offer, recognising everything is connected in a cultural ecology that spreads across England and internationally.”

The Manchester-based think tank also criticised the Government’s announcement of a £15m placemaking scheme for the North, saying this had already been announced.

The fund, which aims to create a legacy for 2018’s Government-sponsored ‘Great Exhibition of the North’, was officially launched by Culture Secretary Karen Bradley last week, but originally announced in the November 2015 spending review.

Raikes said: “Arts funding is yet another way in which central government favours the capital over the North, and re-announcing money in this way isn’t fooling anyone.”

He added that rumours the Government had lost interest in the Northern Powerhouse project “aren’t true”, but emphasised the problem was more than a simple issue of miscommunication.