Nicholas Penny, the outgoing management team of Chichester Festival Theatre and Whitworth Art Gallery’s Maria Balshaw are amongst the 1,163 recipients of this year’s Queen’s Birthday Honours. 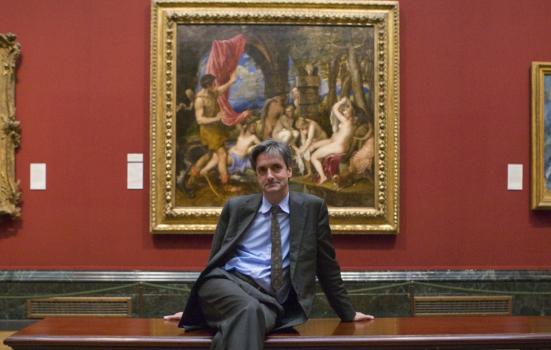 Dr Nicholas Penny, who receives a knighthood, in front of Diana and Actaeon
Photo:

The outgoing Director of the National Gallery, Nicholas Penny, has received a knighthood in this year’s Queen’s Birthday Honours, which see awards go to 1,163 recipients. American Kevin Spacey, who will step down as Artistic Director of The Old Vic this year, said he felt like “an adopted son” after receiving an honorary knighthood.

As they prepare to leave Chichester Festival Theatre, Executive Director Alan Finch, and Artistic Director Jonathan Church receive the next highest honour, CBE. They are joined by director Jonathan Kent, the Whitworth Art Gallery’s Maria Balshaw and the founding CEO and Artistic Director of Manchester International Festival, Alex Poots, who will step down after this year’s festival to take up a position in New York.

Other figures honoured for their work in the visual arts include Simon Wallis, Director of The Hepworth Wakefield and Perdita Hunt, Director of Watts Gallery, who receive OBEs. While Susan Jones, who was until recently Director of a-n, The Artists Information Company, receives an MBE. She is joined by Chair of the Ditchling Museum of Art and Craft, Jenny KilBride Roberts.

Also receiving MBEs are George Owen, Chair of Ombinus; Zoe Jackson, Founder and Director of Living the Dream Performing Arts Company; Jose Santos, who was until recently Artistic Director of Phakama; theatre director and producer Paulette Randall; and Frank Wilson, who is honoured for services to festival arts in the North East.

Conductor and violinist Sir Neville Marriner is among the many artists and performers honoured. Knighted in 1985, he is made a Companion of Honour, of which there are only 65 at any one time.