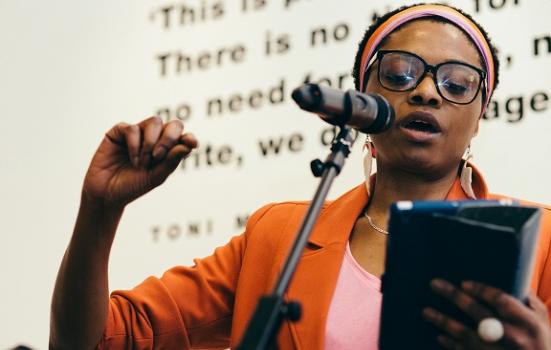 Zena Edwards at the launch of the Climate Change Census
Photo:

Arts organisations are increasingly aware of the importance of operating in an environmentally sustainable way, and change is now being driven by senior staff, new research has found.

Most arts organisations are reaping the wide-ranging rewards of environmentally sustainable practices, with over half benefitting financially, according to a new report by environmental sustainability charity Julie’s Bicycle, released last week.

“What is happening across the country – in theatres, venues, festivals and museums, with artists, curators, green champions and chief executives – is a rich story that needs to be heard,” said Alison Tickell, CEO of Julie’s Bicycle.

“Climate leadership is in the ascendant; creativity is combining with action to accelerate this exciting movement of change.”

Julie’s Bicycle’s Creative Climate Census, based on a survey of 476 cultural workers, found 92% consider environmental sustainability to be relevant to their organisation’s vision and mission.

The report, a follow-up to the charity’s 2014 Sustaining Creativity survey, finds 84% of arts organisations now have an up-to-date environmental policy – up from 67% in 2014. Just under half have a green team or champion and the report identifies increased engagement in environmental issues among senior arts leaders.

“Findings from the Sustaining Creativity 2017 Survey were relatively consistent with 2014 findings but the last three years have seen environmental sustainability climb the agenda in terms of importance and this trend looks set to continue,” the report says. “There has been a slight increase in its reported importance and a similar slight increase in reported actions with most of the sector having implemented or improved their environmental policies and action plans in this time.”

Overall four out of five organisations reported benefits as a result of their environmental sustainability practices, including reputational, staff wellbeing and creative prospects.

Around half of organisations saw some form of financial benefit, driven by energy or other operational efficiencies. One respondent said their arts organisation now uses over 40% less electricity than it did ten years ago – translating into a £67k saving in the last financial year.

Environmental sustainability is also found to act as a creative catalyst, helping to animate new work, partnerships and cultural practice. Three quarters of organisations have collaborated in or beyond the sector on environmental initiatives.

In addition, the research outlines a series of commonly-reported challenges, including:

In response, Julie’s Bicycle has committed to developing a ‘greenprint’ for arts and creative industries, tracing a pathway forward “commensurate with commitment under the Paris agreement”.

The report also urges the development of a shared vision and strategy for change, more opportunities for organisations to share knowledge and network, and the development of collective procurement options for greener products and services. It calls on sector leaders to ensure environmental requirements are not in conflict with other priorities, such as audience development, diversity and growing new revenue streams.