A DCMS-commissioned study cites strong evidence that "can be trusted to guide policy" on arts interventions in some areas of health and wellbeing - but not others. 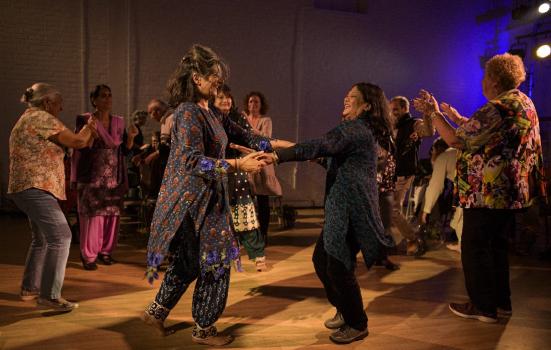 There is "Grade A" evidence to support the effectiveness of the arts in several areas of healthcare and child development, according to new research.

The DCMS-commissioned paper, which looked at more than 3500 studies worldwide, concluded the evidence base is strong "and can be trusted to guide policy development" on the use of the arts in six different areas:

Three more arts in health interventions - supporting older people's cognitive abilities, supporting wellbeing in children and young people, and supporting children's social development - were given a "Grade B" rating, meaning they are "promising" and could be used to guide policy development "in most situations".

However, there was scant or contradictory evidence on the effectivess of several other interventions.

The report suggested "caution should be taken" in considering the use of arts to reduce social inequalities, improve educational attainment, treat and prevent mental illness, and prevent further decline in adults already experiencing cognitive impairments.

Lead researcher Dr. Daisy Fancourt said the review "intended to highlight to policy makers the importance of engaging with this topic".

It addressed the relevance of specific arts-in-health topics to the UK and identified areas where there is strong evidence to make specific recommendations for policy and practice, Fancourt said.

DCMS did not respond to questions before the publication deadline about how, or whether, it would act on the research findings.

The evidence review follows a 2019 World Health Organisation (WHO) report that considered global research on arts in healthcare.

Social prescribing, in which frontline health workers refer people to voluntary and community sector organisations to provide non-clinical treatment, has gained traction in the UK in recent years, although the interventions are not always arts-based.

NHS England has set up a network of social prescribing 'link workers' across the country, collaborations between artists and NHS workers are under way in Wales, and a £2m study by University College London and King's College London aims to 'scale up' the use of proven arts-based treatments.

Last month, the Department for Health and Social Care released £5m for the National Academy of Social Prescribing, based at the Southbank Centre.

However, there are some reservations about how successful social prescribing can be. Canterbury Christ Church University Emeritus Professor Stephen Clift has taken a critical view of the arts' impact on wellbeing, writing recently for ArtsProfessional that the sector is perhaps "overclaiming" the supposed benefits.

The studies that the WHO report, and by extension Dr. Fancourt's, rely on "generally [emphasise] the positive conclusions drawn from them, rather than stressing the caveats," Clift wrote.

Fancourt and fellow authors Katey Warran and Henry Aughterson found there was 'Grade B' evidence to support arts-based social prescribing for improving wellbeing and social cohesion.

But the evidence pointing to its effectiveness in physical healthcare and improving social inequalities - helping people manage their finances, reduce debt and gain employment - was "weak" and "non-existent for social development, the prevention of mental illness, and cognition".

Research that suggests an economic benefit to arts in healthcare must be broader in scope and conducted over a longer period, the report says.

Arts-based investments can return 50p for every £1 spent, or up to £8000 per patient, according to some British studies.

But these research projects have generally only had four or five months' follow-up time: "It s recommended that measures of economic impact should take account of health care costs over follow-up periods of at least a year and consider not just primary care but also secondary care such as hospital admissions," the report to DCMS said.

One longer term study into using dance to prevent falls among older people could save the NHS up to £160m a year if it were rolled out nationwide.

That programme is being run by Aesop, an arts in health enterprise organisation. CEO Tim Joss said the most recent research from Fancourt and her team "provides a valuable service".

"It moves us forward from the widespread it’s-all-marvellous view about arts for health."

He issued two warnings: firstly, that the quality of artistic practice will affect health and wellbeing outcomes; secondly, that translating strong evidence of arts-based healthcare into funded programmes requires other evidence of its worth - "cost-effectiveness, for example".

"DCMS funded us to do the first project on this in 2014 and we have evidence that our programme Dance to Health is cost-effective. Otherwise, little has been done."