Arts organisations in Wales have been told whether they will be admitted into the Arts Council of Wales’ new portfolio of Regularly Funded Organisations. 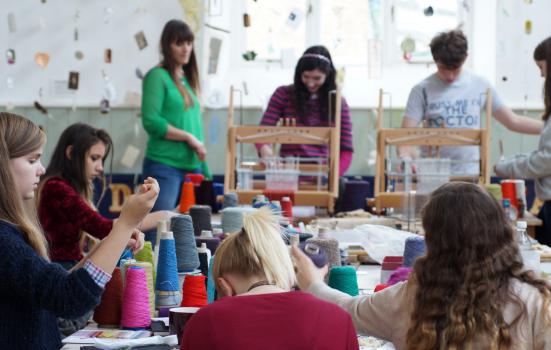 Four new arts organisations are to become Regularly Funded Organisations (RFOs) in Wales, while five leave the Arts Council’s portfolio, following a “transparent” Investment Review in which “exemplary and exceptional” artistic activity has been prioritised over work aimed at community development. 67 organisations – just one fewer than the current portfolio – will receive regular grant in aid funding for up to five years from April 2016.

The RFOs have been selected following an Investment Review process aimed at enabling the delivery of ‘Inspire’, the Arts Council of Wales’ (ACW) radical new strategy for the arts, published in December last year. Four organisations will become RFOs ­– Arts Alive, Blackwood Miners’ Institute, Jukebox Collective and Ystradgynlais Miners' Welfare and Community Hall Trust Ltd – while five will leave the portfolio – Earthfall, Dawns TAN Dance, SWICA, Theatr Ffynnon and Touch Trust. For these five, ACW has set up a special transition fund, ‘Making the Change’, to help them adjust to the loss of revenue funding. They will be given both technical advice and financial support for restructuring. The five, together with a further 26 unsuccessful applicants to the portfolio, will also be eligible to apply for Lottery funding.

ACW describes its decisions as “focussing investment on the exemplary and exceptional,” specifically in terms of artistic innovation and excellence, public engagement and participation, the arts economy and entrepreneurial focus, and governance, management and finance. The Investment Review report giving details of the decisions says: “we expect the organisations that we fund to be well-managed, forward-thinking and business-like, fully committed to delivering value for money in return for the public funding that they receive.” It continues: “We’re taking action to ensure that the arts continue to thrive in Wales. We’re not afraid to make the tough calls, rewarding success and investing funds where they’re most needed.”

To ensure that its Investment Review process was “thorough, fair, consistent, strategic and transparent”, ACW used independent internal auditors to examine the process at three different points during the past year. The report states: “We’ve had to see beyond the well-prepared application and the articulate advocacy. A competent application and a past record of solid achievement are a good start, but won’t in themselves have convinced us.” ACW’s policy is to publish the names of all grant applicants, both successful and unsuccessful. Chief Executive Nick Capaldi explained the rationale for this to AP: “This is about openness and transparency. It shows that we have no hidden agendas; no unspoken policies and strategies. We want to be fully accountable – even if our decisions aren’t popular, we need to be accountable. Also, within the 26 that we can’t support are some excellent organisations. By publishing these names we are sending a message to Government, showing them how much more we could achieve with more funding. We are also hoping that the successful applicants will show generosity of spirit – put an arm around the less successful and help rescue something for those for whom it isn’t good news.”

ACW says it has taken “the long view” in making these funding decisions, describing its task as “to consider the needs of arts across Wales and to make strategic judgements based around the activity that we believe most deserves our support and how best we can resource it.” As part of this, ACW has spelled out its response to applications reflecting aspects of community-based practice that focus on culturally diverse arts, arts and health and disability arts. The report says: “We’ve always been clear that if an activity is not driven by art, it’s a form of social service, or community development. There’s nothing wrong with that – it’s just that such activity will be a lesser priority for Arts Council support.” Capaldi explained: “Community arts has always been a very strong part of our work, and we take a particular view of it, stressing the importance of it being ‘arts-led’. The Welsh Government expects us to be developing their agendas in a range of areas, including communities, but we believe this work must be led through and with the arts. At the root of this is an impatience with the view that the transformational power of the arts is simply about the ‘doing’, the ‘taking part’. We believe it’s also possible that this is work of real artistic quality.”

One of ACW’s hopes for this investment round was for closer collaboration between arts organisations in Wales, but the Council has been “disappointed” by the number and the quality of collaborative proposals that it received. The report notes that it considers its agenda on collaboration to be ‘unfinished business’. It says: “With public funding continuing to be squeezed, we had hoped that applicants would be more imaginative in their willingness to explore the potential for sharing and collaboration. Comparatively few have done so.” Capaldi told AP: “While there are cordial relationships between organisations in the portfolio, few have formed formal partnerships. We feel that there is more potential for public money to work harder through closer collaborations.”

The seven companies designated ‘National companies’ will be required to take a lead on collaborative working. As well as representing “a pinnacle in creative endeavour”, they are expected to be “generous and collaborative, open to ways of working that exemplify collaboration and the sharing of resources… driving down fixed costs through closer cooperation.” Each national company is being asked to formulate specific proposals for developing their sectors as a requirement of future support.

This year RFOs shared £27m in revenue funding, but the funding allocations for 2016/17 are unlikely to be determined until early next year, which is why ACW is describing its new list of new portfolio members as “provisional”. The timetable for the allocations is being delayed by the Spending Review announcement on 25 November. This will determine funding to the Welsh Government, but decisions on the Welsh Government’s funding to ACW could be as late as January 2016. If that funding doesn’t match the requirements of the new portfolio’s business plans then decisions will have to be made as to how the impact can be mitigated. ACW is keeping its options open as to a route forward in the event of a further funding cut, but does not view a raid on Lottery funds as an answer. Capaldi told AP: “The Welsh Government has been a good supporter of the arts and has understood the importance of grant in aid. We are hoping that will continue. But if funding is reduced significantly, we do not intend to try using Lottery for regular funding. We will not be pursuing the same policy as England. We are concerned about letting the Government off the hook. It is our fundamental belief that the portfolio should be funded by Government grant in aid.”