By removing web content and failing to redirect URLs, ACE has thwarted search engines and broken inbound links to its new website, leaving reports and documents untraceable and unsearchable. 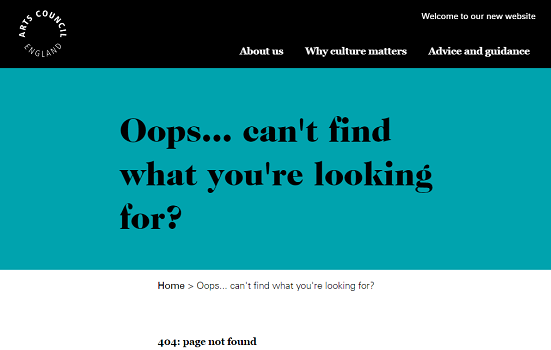 Public access to much of Arts Council England’s (ACE) extensive online archive of reports, briefings, research, case studies and evaluations has come to an end following the launch of its new pared-down website.

The research community, consultants and students have been cast adrift as many documents have been removed, while others have been migrated but with changed web addresses. A failure to set up URL redirects has left Google delivering void results for much of the website’s former content.

Many links from ACE’s own Publication Scheme document, highlighting key material on its website, are also now disconnected.

ACE told AP it has “updated content and reduced the number of webpages, so that our users can find it easier to access the information they want”. But feedback from users suggests that the launch of the new site has had the opposite effect.

ACE refused to tell AP how many documents and web pages have been removed, but it is clear that most links to ACE content from other websites and bibliographies have been broken. Web users clicking on old links are met by error messages declaring: “Oops... can’t find what you’re looking for?” or “We’ve changed!”

According to ACE: “Some content is still being migrated over, and we have indicated where content is coming.” But it is unclear whether ACE will be restoring documents that have been removed, or simply adding new material to the site. On Twitter, ACE told one enquirer: “If we get lots of requests for [the] same doc we’ll put it online.”

The removal of content means that unless a researcher knows that a document exists, there will no longer be any way of finding it online. Some content from ACE’s previous site is being held by The National Archive but the archive is partial and is only indexed by date. AP asked whether the missing material would be indexed for ACE staff on an intranet, and how the public could conduct a search of archived reports, resources and briefings, but ACE declined to respond.

It is not clear whether any external consultation underpinned the content selection process and ACE has refused to give details of the criteria used to exclude material, saying only: “We analysed each page on the old website which showed us how many people were accessing them, we haven’t migrated across information that wasn’t being looked at.”

AP asked whether universities or journalists were asked about their research needs and ACE responded: “We are working with user-testing groups and employees, who were part of the site’s development process.”

ACE is telling users who can’t find material that was previously on the site: “We have a new website, so what you’re looking for might have moved. Take a look around.” Those having problems navigating the site are told to contact ACE’s enquiries team. But unless they can specify the titles of missing reports and documents, these still may not be found. Susan Jones asked on Twitter for the 2009 evaluation of the Grants for the Arts programme, and a 2005 report by consultant Annabel Jackson, but ACE replied: “Do you have the report titles? We’re trying to find them in our lists of documents from the old site.”

Problems created by the removal of material have been compounded by the poor functionality of the site’s search facility, with the use of quote marks as search operators for exact words or phrases delivering unreliable results.

Among those struggling to locate research reports was Mark Robinson, former Executive Director of Arts Council England, North East, whose 2010 report ‘Making Adaptive Resilience Real’ has been removed. He commented on Twitter: “It’s a shame – and not just for my papers – because you can’t properly understand now without knowing about more than just now.” He recommended the CultureHive site as “a good place for info that may stop you thinking you’ve invented the wheel”.

Among the resources that appear to be absent from the new site, at the time this article is published, are:

By removing reports and failing to set up URL redirects ACE has left many broken links to its website from online news sources, including links from ArtsProfessional to recent reports of internal investigations into alleged ACE malpractice. The 2012 report in which ACE cleared itself of any misconduct in its grant giving for the ‘Artists Taking the Lead' programme in Yorkshire has been removed, as has the 2015 report concluding that ACE did not misuse public funds in a Grants for the Arts award to commercial publisher The Oldie, for the Soho Literary Festival.

Researchers and consultants are among those most affected by the new website. On Twitter, James Doeser – a freelance researcher, writer and consultant who until 2013 was a senior researcher at the Arts Council – challenged ACE on the removal of key documents. He said: “Institutional memory is notoriously bad at ACE.” Adding: “I assure you this is a recipe for wheel-reinvention, both by your own staff and those of us externally.”

@jamesdoeser You can request specific docs at enquiries@artscouncil.org.uk. If we get lots of requests for same doc, we'll put it online.

@ace_national understood - but I assure you this is a recipe for wheel-reinvention, both by your own staff and those of us externally.

@jamesdoeser Not quite sure what you mean - are we still talking documents?

Doeser told AP:  “Anyone with a passing knowledge of cultural policy understands that it’s plagued by institutional amnesia. Such a condition can render the patient distracted, wasteful and prone to repetition. Plenty of good stuff seems to have disappeared in this latest well-intentioned overhaul. It’s bad news for scholars and those seeking to hold the Arts Council to account. If something isn’t available in print or findable online then it might as well not exist. Knowledge management in the digital age is a tricky business and I’m sure this hiccup can be fixed and won’t be repeated in future.”

@ace_national is there any way of accessing your publications that aren't from the last 3 years? #panic #doingmydisseration #help!

The new site has also drawn criticism from groups with specific needs. Several took to Twitter to provide feedback, including DYSPLA, which produces the work of dyslexic storymakers. They told ACE the website “is not user friendly,” especially for dyslexics. ACE said it will be “continuing to test with users throughout this month and next to improve this”. Jon Adams, a member of ACE’s South West Area Council, replied to say he hoped this would include those with aspergers and autism, as well as dyslexia.

@ace_national the new website is not user friendly. Esp difficult to use for #dyslexics

Neurodivergent artist Sonia Boué, who recently spoke out about the poor accessibility of ACE’s online grant application process, described the new website as “So not #ND friendly”.

ACE says it will be working with the digital access agency Abilitynet later this month to address any problems.

ACE’s new website was commissioned for £150k from the digital consultancy Reading Room Ltd. It is programmed using the open source content management system Drupal. In its contract ACE said that the primary objective was for a site that “clearly explains the Arts Council England’s role, vision and purpose and demonstrates the impact of public spending” and also focuses on “the Arts Council’s provision of guidance and support”. It makes no mention of the website’s role as an archive of research materials. Although people in the education sector and the media were identified as having to be included in user research, the responsibility for recruitment of individuals for user testing was left to the agency.

AP asked a Drupal web developer whether there were technical reasons why ACE should have chosen not to migrate original content onto the new site. He said: “Maybe there is someone at the Arts Council who understands the need for persistent URIs, but if so that hasn’t been shared with the web developers, who appear to have created the website as a carefully dressed shop window… There is of course an argument that explaining to Joe Public why the Arts Council is a good thing is the right priority, and that element has been done well.”

Please note: The resources indicated as missing from the ACE website were missing when this article was published.

In general UK policy makers are committed in ensuring persistent URIs--in effect, ensuring that the web addresses for documents keep working, long term. The government has eventually been persuaded by Tim Berners Lee and Nigel Shadbolt that this is of critical importance (as is acknowledged in this European Union study, page 16: https://joinup.ec.europa.eu/sites/default/files/D7.1.3%20-%20Study%20on%20persistent%20URIs_0.pdf), and very significant public benefits are now flowing from the policy. An appreciation of why it important to keep web addresses working will gradually filter down to other public bodies: to be fair, it took the government itself some time to grasp the issue. It would be great to see the Arts Council take this opportunity get with or ahead of the curve in an area where the UK government, and the practice of many major of our national institutions, already lead the world.