The national funder wants to develop a culture of enterprise and increase the use of loan finance in the sector. 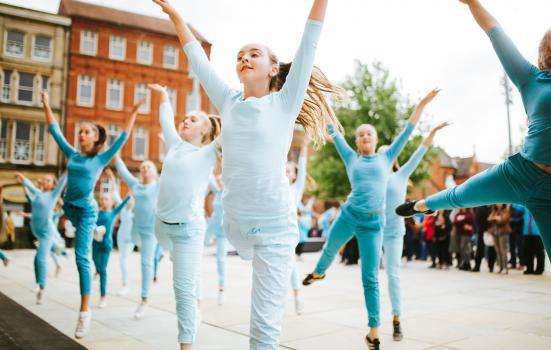 Dancers in Hull during its year as City of Culture. ACE commits to achieving a "long-term beneficial legacy" in the city
Photo:

Arts Council England (ACE) has outlined its priorities for the next two years, including a renewed focus on building resilience in the sector and ensuring a more widespread use of data to influence decision-making.

ACE’s new ‘corporate plan’, which focuses on delivering the funder’s five goals, will be supported by more detailed annual plans by each of ACE’s departments and area councils.

The document emphasises that ACE’s work will “inevitably be influenced by external factors” over the next two years. It expects to give “considerable focus” to advising government on mitigating the negative impacts of Brexit and preparing arts organisations to take advantage of new trade deals.

The plan also references ACE’s commitment to supporting the inclusion of creativity in the school curriculum; increasing spending on the arts outside of London; lobbying local authorities to support the arts; and building the case for the social impact of investment in the arts.

One of six key priorities for ACE over the next two years is improving the diversity of artistic work, audiences and cultural staff. The report notes funded organisations will need to set themselves “increasingly demanding targets” and those in receipt of the most funding will need to achieve a ‘strong’ Creative Case for Diversity rating by 2021.

ACE also commits to improving data collection on audience diversity and socio-economic reach, using this to inform future investment. It intends to broaden the data it collects from the largest arts organisations to include information on the class background of leadership and boards. It will also promote the use of data to inform decision making within arts organisations.

Resilience returns as a key focus, with ACE outlining plans to develop “a culture of enterprise and innovation” in the sector. It will develop a single strategic funding programme to do this, and plans to increase the amount of repayable loan finance available to arts and cultural organisations.

Alongside its priorities for the next two years, the strategy document refreshes ACE’s plan for achieving the five goals outlined in its 2010-20 strategy ‘Great art and culture for everyone’.

It will undertake an evidence review into the potential for increasing the amount of private giving to arts and culture, building on the Private Investment in Culture survey. It will also develop more strategic partnerships with private funders, and create a network of community foundations and individual philanthropists to “share knowledge and support future programme development”.

The new Sector Support Organisations will be key to supporting apprenticeships, skills, and workforce development. ACE plans to lead by example, by employing apprentices itself.

The document also sets out priorities for each artform and each of the five ACE areas. In the North, ACE commits to achieving a “long-term beneficial legacy” for Hull after its year as City of Culture, and in the Midlands to developing the potential of Leicester, Birmingham, Nottingham and Wolverhampton as Black and minority ethnic ‘talent hotspots’.

Last month, the Isle of Wight was announced as a ‘priority location’ for the Arts Council. The funder promised to help create a “unified voice for culture” in the area and work to develop local arts organisations including New Carnival Company and Shademakers.

An ACE spokesperson said each arts council area has its own strategic plan, which “may identify places of focus for cultural development”.

They stressed the agreements don’t guarantee specific new investment, but “we hope the time we spend there will result in strong, competitive applications for our existing programmes”.