Artichoke says it will keep Jess de Wahls' contribution to exhibition which provides a platform for "all women, trans and non-binary people": "We do not believe in cancel culture" 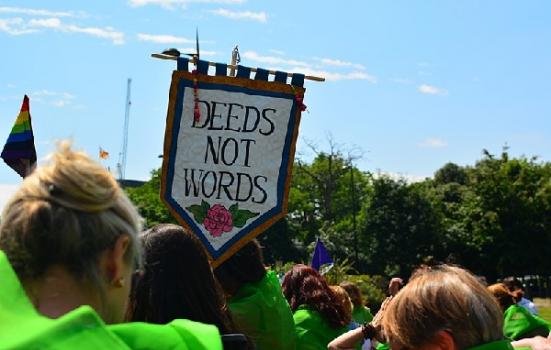 One of the banners from PROCESSIONS now on display for Women Make History
Photo:

Arts company Artichoke will keep work by Jess de Wahls in a women-focussed exhibition, saying "we do not believe in cancel culture".

de Wahls, whose work was removed from the Royal Academy of Arts' (RA's) gift shop last week over her "transphobic views", was commissioned by Artichoke to work with refugee women to create one of 100 banners commemorating the centenary of women's suffrage in 2018.

Now on display in its exhibition 'Women Making History', Artichoke says the banners project was "notable for its diversity and inclusivity," platforming women, trans and non-binary people.

"Artichoke believes art should be a safe space for debate," a statement released to ArtsProfessional said.

"We do not believe in cancel culture but do believe it is important to understand and acknowledge the lived realities of trans people."

The RA has since apologised to de Wahls and indicated it will restock her feminist-themed embroidered patches. "One thing is clear to us now - we should have handled this better," the institution said on Wednesday (June 23).

"This has confirmed to us our commitment to freedom of expression and to addressing complex issues through engagement and debate."

de Wahls, who has publicly mulled over suing the RA, was the subject of eight complaints over a 2019 essay in which she shared her support for people expressing a non-binary gender, noting her own father's proclivity for heels and lipstick.

However, she said: "I cannot accept people's unsubstantiated assertions that they are in fact the opposite sex to when they were born and deserve to be extended the same rights as if they were born as such."

On Wednesday night she tweeted that the "issue isn’t going to leave the building over night, but I do believe the apology was sincere and this is a step into the right direction".

The RA says its approach to complaints about de Wahls "betrayed our most important core value - the protection of free speech".

The gallery explained its initial decision via Instagram before telling de Wahls - a "failure in communications internally", it says. It was not aware of her views before it received complaints and was attempting to show solidarity with LGBTQ+ community, according to the post.

Research by ArtsProfessional in 2019 revealed a fear of backlash from funders, colleagues and the public stops arts workers from speaking out about issues of bullying and harassment, as well as anything that might be considered "politically incorrect" to the left-leaning sector.

Gender was "minefield" for many: "Anything to do with gender issues, especially trans issues, will get a lot of flak for either not being on message enough, or being off message or too on message,” one person said.

Research by the University of Bristol, University of Sheffield and Edinburgh College of Art has concluded the predominance of liberal views in the arts may contribute to the sector's "social closure" and exacerbate the UK's current culture wars.

Questions about possible diversity quotas in the arts have been shot down by a Conservative MP as "preposterous".

Minister Caroline Dinenage responded by pointing to Arts Council England's inclusivity and relevance work, saying the Government expects the cultural sector "to represent our diverse society in their artistic talent, workforce and audiences".

The very idea was decried by John Hayes, Chair of the 'Common Sense' group of Tory backbenchers, who said artists should not be judged on "some characteristic that has nothing to do with art or music, with paintings or drama".

"Mandatory quotas would mean every artistic endeavour and every audience had to be checked to see if they met these targets," the Daily Express reported.

"This is just not what our free society and a vibrant culture is about... Just how far do the wokes want to take this?"