Children and the Arts is complaining to Trading Standards after receiving an unsolicited invoice and correspondence from the Regulator implying that a voluntary levy is compulsory. 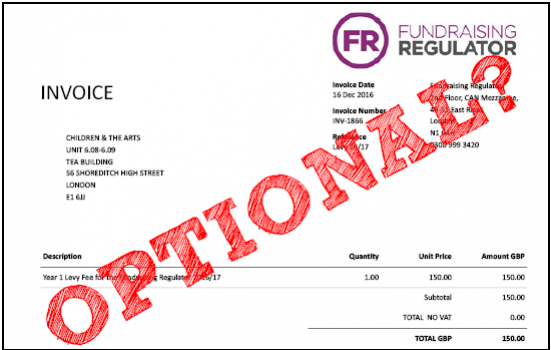 Arts charity Children and the Arts is reporting the Fundraising Regulator to Trading Standards after receiving an unsolicited invoice and correspondence implying that it must pay an annual levy to the Regulator.

A letter that the Regulator claims to have sent to Children and the Arts’ CEO prior to the invoice – but which in fact was addressed to the Finance Manager – tells Children and the Arts that the levy is being applied to all charities that declare a spend of more than £100,000 a year on fundraising.

The letter states that the levy “will apply for three years in the first instance”. Children and the Arts has been told that the first invoice, for £150, is “in arrears” for “regulatory services” that began in September 2016. Signed by Lord Grade and Stephen Dunmore, Chair and CEO of the Fundraising Regulator, the letter goes on to say that payment for the second year will be due in June 2017 and for the third year in June 2018.

It fails to clearly state that the payment of the levy is voluntary, although it does say that charities “voluntarily paying the levy” will be “contributing their allotted share to meet regulatory costs”. It states that, by paying, the charity is agreeing to follow the Code of Fundraising Practice and display the Fundraising Regulator badge.

The invoice is for a specific amount and gives a payment due date, but neither the invoice itself, the covering email nor the terms & conditions make any reference to the fact that the levy is a voluntary payment, and would in effect be a donation.

Sending unsolicited invoices that give consumers the impression they have ordered a product or service when they haven’t, and omitting key information that consumers need to make an informed decision, are both criminal offences under Consumer Protection from Unfair Trading Regulations 2008. Those convicted can face fines or imprisonment for up to two years, or both.

Children and the Arts’ CEO Jeremy Newton described the Regulator’s actions as “a classic case of trying to get money under false pretences” and said “the clear – surely deliberate – implication is that payment is, in fact, compulsory. The references to invoices clearly imply this is not soliciting donations but charging for services.”

He continued: “Because of the issues which have given rise to the formation of the new Regulator – aggressive ‘chugging’, persistent pestering of donors, poor corporate governance, for example –  they need to be bending over backwards to set a good example and espouse the most ethically sound approach to fundraising. Bombarding charities with invoices in the hope that someone will pass them through for payment without spotting the ‘voluntary’ small-print all smacks of highly unprofessional, non-transparent, over-aggressive fundraising – just the kind of thing the new Regulator was set up to stop.”

Children and the Arts is not the first arts organisation to raise objections related to the Regulator’s fees. Tate and the British Museum were among five of the top 50 fundraising charities in England and Wales who were approached by the Fundraising Regulator to contribute £15,000 towards its start-up costs, and refused to do so. Tate refused on the grounds that it is already regulated by the DCMS and that it doesn’t engage with the type of fundraising activities that the Regulator was set up to monitor.

Civil Society News has reported that both have subsequently agreed to pay the annual levy.

The role of the Regulator has not been accepted across the whole of the UK. A consultation in Scotland found that charities would rather the Office of the Scottish Charity Regulator take on an enhanced role supplemented by an independent panel, rather than sign up to the new Fundraising Regulator.

Northern Ireland has come to an interim agreement with the Regulator, which will field complaints about charities while a working group on Northern Irish regulation carries out more detailed consultation.