There is “an urgent need” for funders and arts organisations to develop more culturally appropriate approaches, says a new report. 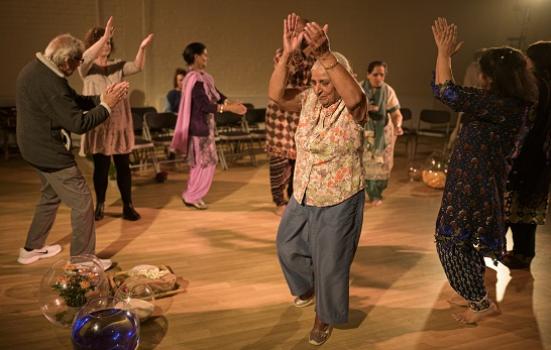 British South Asian communities are missing out on a decade’s worth of advances in the field of arts and dementia, according to new research.

The study by theatre company Spare Tyre, The Baring Foundation and researcher Elizabeth Lynch found these services were not generally culturally appropriate. There is no word for dementia in many South Asian languages – the closest terms in Urdu, Bengali and Punjabi translate as ‘forgetting illness’.

Lower awareness of services, “prevalent” stigma about the condition among British Indians, Pakistanis, Bangladeshis and Sri Lankans and stereotyping by service providers that those communities “look after their own” were found to have impeded the uptake of services.

The research report says that “while there is growing awareness of the value of artistic activity for people living with dementia, this activity has not reached the UK’s South Asian communities in a significant way.”

Very few British care homes cater specifically to South Asians: Prashar estimated there are five or fewer in London. While it is more common for South Asians with dementia to live at home, with some accessing day care services, Prashar found “gatekeeping” by South Asian care home managers was the main barrier, rather than the content of the show. “The managers are not familiar with ‘theatre’ as a cultural offer or as an activity,” the research says.

‘The Garden’ used non-verbal and sensory cues – including real earth, leaves and snails – to meaningfully and respectfully connect with its audiences, Prashar said.

“They have played with us, imagined with us, laughed with us, thanked and blessed us for spending time with them. Their families did the same.”

The study says that artists and dementia service providers should make more effort to engage with South Asian women who care for relatives with dementia.

Their input is “a valuable resource” but underrepresented in dementia arts, in part because these women are often unaware what services are available. One dementia care professional interviewed for the research commented: “The women really wanted to add their voices to those that are normally heard and seen … once you are able to access those communities, we shouldn’t be surprised they have a lot to say.”

The challenge for artists and carers is ensuring the content they create for artistic activity is culturally appropriate.  The research report notes, for example, that elderly women often prefer women-only activities. “When the care home accommodates the family and the community, culture can be brought to the residents,” the report says.

Several groups involved in the research also suggested faith leaders at gurdwaras, mosques and temples could encourage communities to access information and support.

Prashar said the complexities and barriers in engaging South Asians with dementia are not insurmountable: “It might seem like there are a few hurdles but it is very doable and I think the communities would actually welcome it.”

Three groups involved in Spare Tyre’s research have co-created content for a follow-up show, ‘Love Unspoken’, which will visit Wandsworth and Kingston-upon-Thames from May. It is hoped the show will shift thinking within South Asian diaspora communities and the professionals and agencies who care for them.

Prashar added: “in order to support people working with dementia we will need to come to a point where we’re supporting the carers as well.”

As the visual arts lead at Hoot Creative Arts (creative work with adults working towards better mental health), we have just started an action research project with Creative Scene. We will be widening our links with the S.Asian community in Dewsbury (new participants and artists), to explore existing collections in local museums and galleries, discuss their cultural relevance and create our own cultural collection..Looking forward to where this research will take us

Thursday, 09 April 2020
Property developers are proposing "arts related uses" for the ground floor of a project to revive the derelict Whitworth Mill on the the banks of the River Nene in Peterborough. An area of external... read more
(Peterborough Telegraph)

Thursday, 09 April 2020
Audio description charity VocalEyes is inviting users of this technology to tell them what the characteristics of a "perfect audio description system" would be. Various different systems are... read more

Thursday, 09 April 2020
The Government has indicated that it will enable theatres and other cultural venues to keep Gift Aid on payments made for events cancelled due to coronavirus. The Charity Tax Group and others,... read more
(UK Fundraising)