National Theatre staff say the protest is “the beginning of a discussion in which we will push for our theatre to divest from big oil sponsorship”. 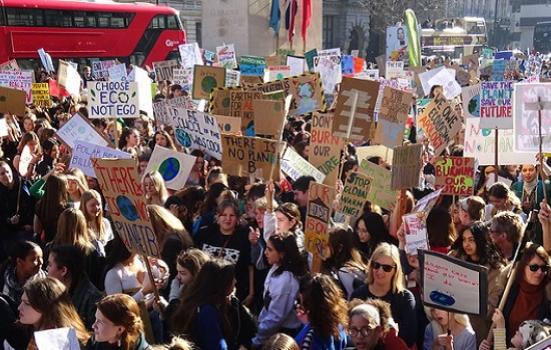 Arts and culture workers have joined a climate strike in London. A similar event in March 2019 is pictured here.
Photo:

Staff at some of London’s largest arts and cultural institutions are pressurising their employers to take firmer action on climate change by walking off the job.

About 85 workers from the National Theatre, Tate Modern, Tate Britain and Southbank Centre are expected to join thousands of protesters in the Global Climate Strike on Friday (September 20). “On Friday, arts workers will be calling on all cultural institutions and creatives to step up their efforts to tackle the climate crisis,” a statement released by the protesters says.

Adding to a growing refrain in the sector, representatives for the striking staff said they believe that “art and culture workers have a vital role to play in the radical changes needed to avert climate disaster”.

“The cultural organisations they staff are in a unique position to engage citizens in the urgency, values and opportunities of a transition away from fossil fuels.”

The protesters’ public statements indicate that cultural institutions will face growing pressure to assume leadership in discussions about environmental responsibility. National Theatre staff member Katherine Hearst said she and her colleagues “will be demanding more agency in our workplace and a say in how the theatre can contribute to the climate movement”.

“This will be the beginning of a discussion in which we will push for our theatre to divest from big oil sponsorship and sign the Culture Declares Emergency declaration.”

Gareth Spencer, Southbank Centre Branch organiser for the Public and Commercial Services union (PCS), says it wants all its members’ employers – which include DCMS, Creative Scotland, and several national museums and libraries – to run green forums, promote the role of ‘green reps’ in the workplace, commit to becoming carbon neutral by 2030 and, crucially, to “refuse to accept fossil fuel sponsorship”.

Spencer said the management of the Tate galleries has already agreed to meet its branch’s demands. Similar calls have been expressed to the Southbank Centre and British Museum, which receive sponsorship from Shell and BP respectively.

The National Theatre’s management has supported its workers attending the strike after a petition signed by about 100 of its staff, artists and supporters, including actors Sir Mark Rylance, David Threlfall and Freddie Fox, said that financial insecurity “prevents many of us from contributing meaningfully to the climate movement”.

“Casual work is consistently vulnerable to change and without guaranteed hours,” says the petition. “It is extremely easy to feel small in the face of climate breakdown, through fear of not making rent, balancing mental health and falling sick/losing shifts. It is easy to feel powerless to affect change in our workplace.”

Joe Hayns, organiser of the BECTU’s technicians’ branch, said that a law change was needed to give workers more freedom to take industrial action that raises awareness of climate change.

Are we at last taking environmental issues more seriously?
Artists must ‘tell the truth’ about the climate emergency
Culture and climate change