Artists must ‘tell the truth’ about the climate emergency

Royal Court Theatre, Shakespeare’s Globe and National Theatre Wales are among the organisations calling for a creative response to the looming ecological crisis. 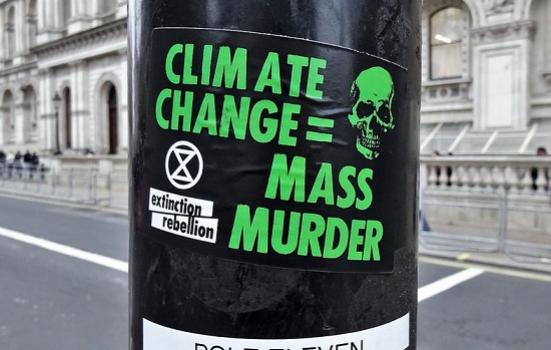 A campaign sticker by Extinction Rebellion, the campaign group which has inspired the letter writing project
Photo:

Theatres and creatives across the country are urging the arts sector to “do its part” and “tell the truth” about the impending ecological crisis through participation in a nationwide artistic project.

Shakespeare’s Globe, National Theatre Wales, award-winning poet Kate Tempest and playwright Simon Stephens are among those calling on the public to pen “letters to the Earth” – dramatic or personal responses to the climate emergency facing the world.

These would then be performed to audiences at arts venues in a “day of action” on Friday 12 April, followed by an open conversation to bring people together in the face of the crisis.

BAFTA-winner Michaela Coel and the Royal Court Theatre have also given their backing to the initiative, which is encouraging all arts venues and community spaces to participate.

The project follows dire warnings from the International Panel on Climate Change, which believes there are only 12 years left to change how we live to “avert disaster”.

“As Sophocles and Shakespeare and Moliere and Ibsen and Brecht wrote plays as interventions into the major political crises of their worlds and of their time, so we now need our writers to record and reflect this probably biggest ever global challenge,” commented David Lan, former Artistic Director of the Young Vic.

He adds that creatives need to “help us understand what to do” and how to prevent climate disruption from “destroying so much that the west, the east, the north, the south have struggled to create over millennia”.

“The time has always been now.”

Members of the public are invited to write the letters, which organisers of the event say could be letters “to or from the Earth, future or past generations, those who hold positions of power and influence, other species”. The letters – either dramatic or personal in nature – will be made available to download from 15-28 April to coincide with Earth Day and a range of other international protests.

“The invitation is open to all – to think beyond the human narrative and bear witness to the scale and horror of this crisis,” the organisers add. “This is an opportunity to ask how this existential threat affects the way we wish to live our lives and the action we take.”

The letter-reading will form one of a range of cultural events in the run up to the ‘International Rebellion’, which begins on 15 April, inspired by the work of campaign group Extinction Rebellion. The group emerged into public consciousness last November when thousands of demonstrators occupied five bridges in central London to draw attention to the looming climate crisis.

“Arts and culture practitioners and institutions, these times are calling on us all - to pause and reflect, not just on the emotional impact of what we are witnessing, but on what we can do now commensurate with this existential threat,” commented Kay Michael, one of the organisers of the letters project.

“As storytellers, writers, theatre-makers, producers, actors, directors, as creators of culture and thought leaders, let’s tell the truth about the climate and ecological collapse and act as though that truth is real.”

The deadline for submissions is midnight on 29 March. More details are available on the Letters to the Earth campaign site.