Artists face Catch-22 as studios close while debts mount up

As Scotland’s emergency funding is overwhelmed by demand, the Scottish Artists Union is highlighting the plight of visual artists whose landlords are demanding rent while excluding tenants, preventing them from making or selling their work. 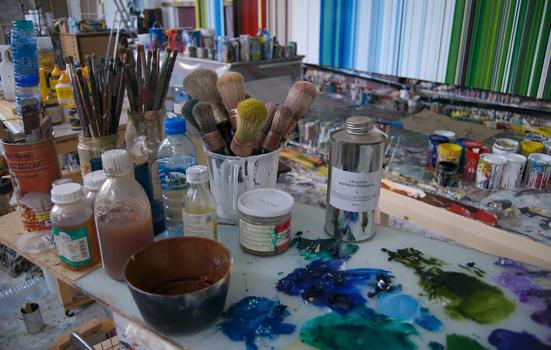 The Scottish Artists Union (SAU) is calling on Creative Scotland to find ways to support artists’ studio provision during the Covid-19 lock-down period. Some landlords are continuing to demand rent even though the artists aren’t allowed into their studios, meaning they are unable to make or sell their work.

The union points out that many visual artists are falling between the cracks of current provision – not entitled to welfare benefits, small business grants, furlough payments or many of the other forms of support from governments and funders.

Creative Scotland has been taking steps to sustain artists affected by the coronavirus crisis, but its initial funding programme was soon overwhelmed. More than 800 requests for a total of just under £1.5m  were made in the first three days after the launch of its £2m Bridging Bursary Fund for the arts and creative industries. This offered one-off bursary payments of between £500 and £2,500 to cover immediate needs, backed by £1.1m diverted from Creative Scotland’s existing Grant in Aid and £0.9m from its National Lottery funds.

Last week saw the announcement of a further £2m for Scotland’s creative community - £1m from the Scottish Government and £1m from the Freelands Foundation, which has committed a total of £3m towards emergency funds for artists, creative practitioners and freelancers across the UK.

But the whole of the Bridging Bursary fund for the arts and creative workers has already closed and Creative Scotland is now processing the requests and responding to applicants as soon as possible within its pledged four-week timeframe.

To enable artists to continue developing creative work through the pandemic, Creative Scotland has also re-purposed its Lottery-backed Open Project Fund under new criteria. Now known as the Sustaining Creative Development Fund, £7.5m has been earmarked for applicants to stabilise their existing activity and reimagine their work during the current climate and months to come. This includes freelance and self-employed artists and creative practitioners in Scotland, who can apply for projects that support the development of their practice.

The SAU has been hearing from members who are being badly affected by loss of income from many sources: gallery closures and cancellation of events and exhibitions; cancellation of private classes and workshops; loss of community and educational work; delayed payments on work already delivered; falling commissions and sales; ineligibility for Universal Credit or forms of support; and loss of part-time jobs outside the arts sector.

It is calling for a stronger public message from the Board at Creative Scotland in relation to the unprecedented challenges facing visual artists, and for more details of how they aim to tackle the fragile infrastructure in the longer term. It wants the creative unions to be involved in developing a strategy that will ensure the sustainability of the arts sector and safeguard fair and decent working lives for Scotland’s professional artists in the future.

Lynda Graham, SAU President, described Scotland’s visual artists and makers as “facing real hardship”. 81% of the union’s 1,500 members earn on average less than £10,000 per year from their art and already supplement their income with other part-time work, which has also been affected.

As well as meeting with Creative Scotland, the SAU has met with the Scottish Government and has joined the Scottish Trade Union Congress (STUC) to campaign for equal treatment for all those working in the creative industries.

It is calling for the Scottish Government to provide emergency funding targeted at visual artists and makers, similar to the funding aimed at small businesses. And it is asking the UK Government to:

Graham said: “Artists are integral to our society and economy, they deliver invaluable work in schools, colleges, and through socially engaged practice in Scotland’s communities within health and social services… what is needed, as a matter of urgency, is for the UK Government to remove the rules and restrictions that discriminate against this very vulnerable section of the workforce and to ensure they have the same level of protection and support as others.”