Art is ‘the elixir’ to teach humane lessons, MPs hear

The DCMS committee heard there had been no press coverage challenging the expenditure of £50m on arts activities to commemorate the First World War. 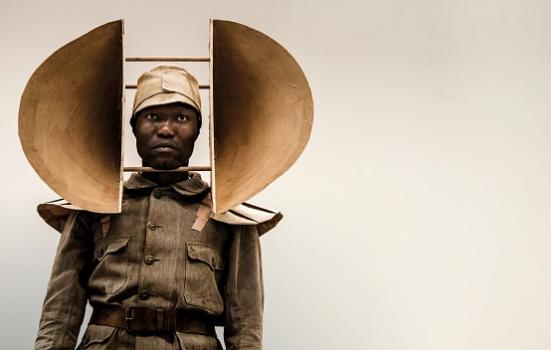 William Kentridge's 'The Head and the Load' project, one of 14-18 NOW's commissions
Photo:

Public art projects are uniquely placed to bring disparate communities together to remember and learn from violent history, MPs were told this week.

Politicians on Parliament’s Digital, Culture, Media and Sport (DCMS) Committee also heard from academics, culture professionals and Government officials that arts organisations are in a strong position to understand their communities and help provide a local dimension to national events.

The comments were made as part of an ongoing inquiry into the UK’s decision to commemorate the centenary of World War One (WWI) with a series of ambitious contemporary art projects.

These included a colourised documentary about life in the trenches, directed by Peter Jackson, and a UK-wide art event, devised by Jeremy Deller, in which 1,600 volunteers wearing replica WWI army uniforms appeared across the country to mark the anniversary of the Battle of the Somme.

“[Culture] is one of the best uniting things that we have,” Sir Anthony Seldon, Vice-Chancellor of the University of Buckingham, told the committee. “The humane lessons, that killing is not good. That violence is not good. That compassion and empathy and understanding, reaching out across mental health barriers, gender, class, race, nation – these are very good things to do.

“And art uniquely provides the magic, the elixir, to make that happen.”

The inquiry’s focus is the five-year 14-18 NOW programme, set up to coordinate arts activity across the centenary. The committee will assess whether arts and education initiatives were more effective at connecting with younger people than “more traditional methods”; whether the distribution of events across the UK was effective; and whether the events inspired community and volunteer involvement across the UK.

Speakers noted that 35 million people were reached through 14-18 NOW, in 220 locations across the UK, and that one project had reached 40,000 school children.

Jenny Waldman, Director of 14-18 NOW, said that 61% of the programme was free, and that much of that was large-scale and outdoors. “Once you do that the diversity of the demographic changes… and more accurately represents the UK,” she said. “Taking our heritage outdoors and making it free and available to the public where they are is one of the lessons we should take on,” she said.

She added that taking the poppy exhibition on tour had allowed the organisation to spread the centenary activities across the country and transmit a “greater sense of pride”.

Diane Lees, Director-General of the Imperial War Museum, said that participation in the centenary events had a “massive impact” on the museum. “It’s rounded us out in terms of being able to accept risk, and to give curators the confidence to work with contemporary artists and all of those skills that will be in the museum as part of the legacy”.

All the witnesses agreed that the art-led approach involved a degree of risk, as did the commitment to host events across the UK. Waldman said that the biggest risk with projects such as Jeremy Deller’s was that no one would notice at all. “In fact, 2m people saw the soldiers and the emotional response was quite phenomenal,” she said, noting that the entire project was managed in partnership with a network of theatres.

MP Andrew Murrison, the Prime Minister’s Special Representative for the Centenary Commemoration, said there were “elements” of Government concerned about taking commemoration events into Northern Ireland, because they would take place during Ireland’s decade of commemorations relating to historical events from 1912 to 1922.

But he added that the success of the projects shows that “commemorating shared history, warts and all, just shows the power to unite people.

“The Irish dimension has been the most heartening.”

Waldman added that local connections with theatres in Northern Ireland had been key to setting the right tone, that the success of the project was proof that the cultural community in the UK is “immensely strong”, and that the combination of arts and heritage is “hugely successful and absolutely worth taking bold risks [for]”.

Another key question for MPs is whether the £50m allocated to the programme was spent effectively. Picking up this theme, MP Julian Knight noted that he had seen no press coverage focusing on the amount spent across the entire period.

Similarly, Lord Ashton of Hyde – DCMS Minister with responsibility for ceremonials – said that there were no arguments over budgets, with all Government departments very keen to be involved.

Seldon said one of the most impressive elements of the activity was that it was carried out at a time when the country was more divided than in had been in peacetime for 100 years.

He added that it would have been “folly and dangerous” to use the activity to reach political conclusions – such as believing that the lesson from the war was that the country must remain part of the European Union.