As Tate Modern's latest art installation starts to melt away, AP's Jonathan Knott reflects on how art can play a role in tackling environmental challenges. 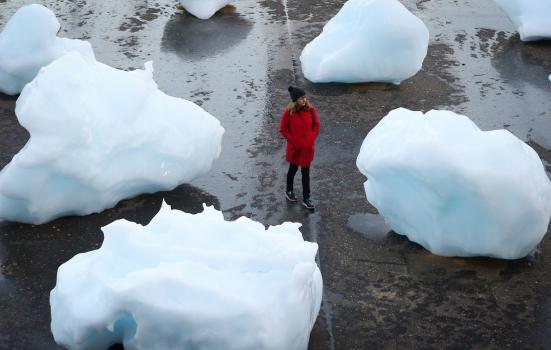 On Tuesday morning, people gathered outside London’s Tate Modern to view the latest art installation there. As with many of the gallery’s crowd-pulling shows, there were plenty of selfies and group photos. There was also a lot of physical contact: caressing, prodding and even gently kicking the work on display.

It’s just as well visitors are getting as much as they can out of this exhibition, because it won’t last for long. The artist Olafur Eliasson, previously responsible for the popular Weather Project installation in Tate Modern’s Turbine Hall in 2003, has transported ice blocks from a fjord in Greenland, where they had become detached from the ice sheet. 24 are placed outside the gallery, with a further six outside Bloomberg’s European headquarters in the City of London.

The work prompts a visceral and immediate response. People are drawn by the arresting colours, ranging from turquoise to transparent, the smooth and jagged textures, and the way the light plays on the ice from different angles. The blocks make for a striking spectacle in the urban setting – and a clearly transient one as they melt before visitors’ eyes, the water gathering into a nondescript puddle.

The Ice Watch installation, a joint project from Eliasson and geologist Minik Rosing, has previously been displayed in Copenhagen and Paris, and is intended to draw attention to the urgency of climate change.

Gaining public attention for this issue can be difficult and current political turmoil does not make it any easier. Ice Watch’s launch in the UK comes as recent events have underlined the depth of the upheavals taking place in this country and further afield. Both Theresa May and France’s Emmanuel Macron are struggling to contain growing public dissatisfaction and opposition from lawmakers. And their difficulties make clear the current disconnect between political elites and the priorities of those they are governing.

In attempting to overcome this problem, politicians have tended to adopt two strategies: on the one hand, talking down to people by insisting ever more loudly that they are wrong. And on the other, simply pretending that difficult choices don’t exist. The current difficulties with Brexit suggest that neither approach is adequate: the ‘project fear’ of the remain campaign was notoriously unsuccessful in 2016, while the confident promises of Brexiteer politicians have failed to materialise.

Eliasson’s work takes a different approach. By placing the delicate ice blocks in the heart of a modern city, the work makes tangible the damage that our lifestyles are wreaking on the planet. And vividly engaging the senses helps make climate change seem like something real, rather than an abstract notion with little discernible impact on many people’s daily lives.

When I asked Eliasson about the impact of the work, he said he thinks that fear-based narratives tend to be unpersuasive, and he prefers to create a meaningful encounter with the environment to encourage change. London’s deputy mayor for culture, Justine Simons, expressed confidence that the work will change attitudes, saying at the launch that Ice Watch “will bring the stark reality of climate change to thousands of people in a very direct and very intimate way. It will undoubtedly inspire action.”

There is no real way of proving whether these ambitions will be achieved. But in recent years we have seen how facts, figures and dire warnings are often not very effective tools for developing productive conversations, whether about climate change or other contentious issues.

It’s surely worth seeing whether art can do any better.

ArtsProfessional is publishing a special issue on the arts and environmental sustainability in February.