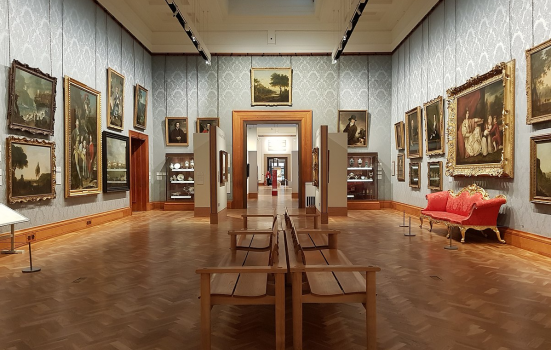 A hire system for unused spaces is one of many proposals to increase artistic diversity in Wales
Photo:

The Arts Council of Wales (ACW) will review eligibility criteria for its portfolio and mandate anti-racism and anti-ableism training for senior staff as it overhauls itself into a "truly representative" organisation.

A giant programme of work, much of it shared with Amgueddfa Cymru, the National Museum of Wales, aims to broaden engagement after highly critical reports last year said the institutions were entrenched in white supremacy and ignorant of D/deaf and disabled audiences' needs.

While the museum looks to decolonise and diversify its collections, ACW is "redefining the concept and role" of its funded organisations. It plans to introduce new anti-racism and anti-ableism "expectations" for grantees as well, and relaunch its diversity-focussed Creative Steps programme by 2023.

British Sign Language will be adopted as the Arts Council's third language and Welsh will be better integrated into cultural activities, with plans to help artists and arts workers learn the language.

ACW says it has already appointed a Welsh Language Enabler who will take "a radical and intersectional approach".

"Culture is everywhere, but funding and connection with our cultural institutions are not equally distributed," Chair Phile George said, acknowledging a need to "make progress towards equality of opportunity" following the "challenging" reports.

"We are committed to engaging more widely with communities all across Wales, funding cultural activity which reflects the lives, concerns and creativity of people in those communities. These action plans... are vital first steps in widening engagement."

New hires will shepherd ACW towards a more diverse future.

Black Lives Matter activist Andrew Ogun was hired as Agent for Change last April and charged with making access to the council's activities and funding more equitable. WAARU had advised against the position, saying a team was needed rather than just the one person.

Now, ACW plans to hire more Agents of Change to work with Amgueddfa Cymru on updating displays and exhibitions across all seven national museums by 2025.

A cohort of artists and creative practitioners have been drafted as "associates" to help make decisions on grants and a changing of the guard on ACW's council last year meant "the representation of people with lived experience of ableism and racism increased significantly," the funder says.

The Creative Steps programme, which aims to strengthen diverse-led arts organisations and improve their representation in Arts Portfolio Wales, will become a rolling programme for awards under £10,000.

It will also grow to encompass individuals, with a new strand supporting those who have traditionally struggled to access funding.

"We are aiming to address this inequality by supporting these artists to develop their creative journey with dedicated input from associates with relevant lived experience, and also specific expertise in mentoring, for example," an ACW spokesperson said.

ACW will adopt cultural democracy "both in theory and in practice".

This could include "people's panels" or similar models of encouraging co-creation. By 2025, a system for hiring unused equipment and space in museums and arts venues should be established to help more creatives make and share their work, the plan notes.

Schools will receive anti-racist and anti-ableist resources to empower communities to "shape and inform their own cultural experiences", and creative learning programme Cynefin will be rolled out across more schools and museums with the help of practitioners with lived experience.

It is hoped these efforts will lead to a national arts scene that is more representative of "the histories and the creativity" of diverse communities.