As well as receiving core funding from the Lottery, Arts Council England’s National Portfolio Organisations were awarded over half of all Strategic and Capital funding last year. 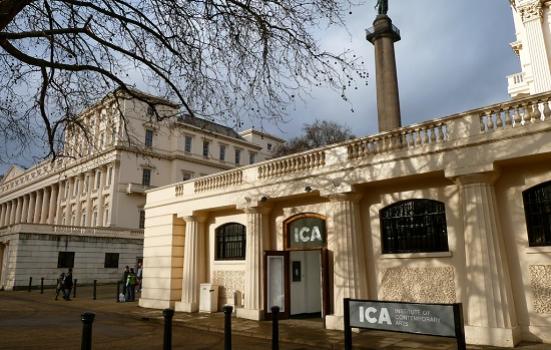 The Institute of Contemporary Arts in London, which is receiving core funding from Lottery money

Over three-quarters of Arts Council England’s (ACE) Lottery grant expenditure went to its National Portfolio Organisations (NPOs) last year, in addition to almost two-thirds of its government Grant in Aid.

£353m of Lottery grants – out of a total of £465m –  were awarded to NPOs. This was in addition to £310m from government Grant in Aid (GiA), which supported both NPOs and Major Partner Museums.

80% of the Lottery funding awarded to NPOs will provide four-year core funding for 149 organisations for the period 2018-22, worth a total of £285m. This goes to NPOs involved in touring and activities with children and young people, including some major institutions such as The Crafts Council, Sadler’s Wells and the Institute of Contemporary Arts. 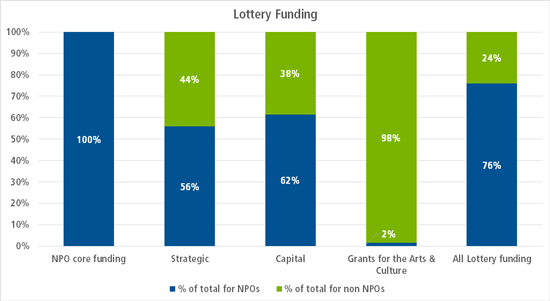 NPOs also benefited from the majority of ACE’s Strategic and Capital Lottery funding.

ACE uses its strategic funding to “address gaps in the sector, such as enhancing diversity and increasing the reach of art and cultural activity in areas with low levels of engagement.” £43m of the £77m of Lottery expenditure on this was allocated to NPOs, as was £9m of GiA.

The only Lottery funding stream where artists and non-NPO arts organisations took the lion’s share was the £64m open application Grants for the Arts and Culture (G4A) scheme, which now represents just 14% of all Lottery expenditure. This is down from 77% in 2010/11, when open access grants to individual artists and smaller companies, in support of new work and creative participation, formed the largest proportion of Lottery funding. 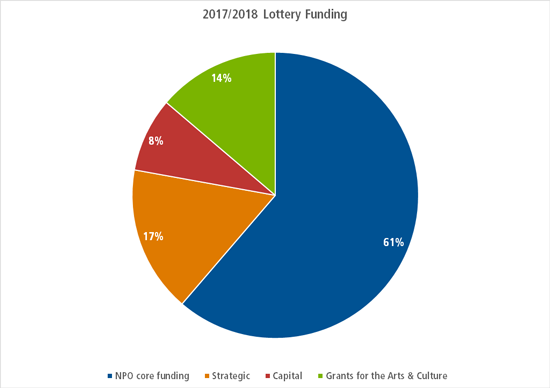 This means that the Lottery grant commitments made in 2017/18 will be part-funded by future Lottery income and ACE will be drawing on the reserves it built up by underspending in previous years.

The practice of earmarking Lottery revenues for core funding of NPOs is a controversial one.

The principle under which Lottery funding must be distributed, known as ‘additionality’, means that its use must be “distinct from government funding and adds value”. It must not be used as a substitute for government expenditure, though where appropriate it can be a complement to it.

The controversy first arose in ACE’s 2012-15 funding round, when 20% of core funding to some touring NPOs, worth a total of £54m, was diverted from Lottery funds. At that point ACE also abandoned its requirements for Lottery-funded NPOs  to submit a separate application for this money, and for them to demonstrate additionality any more than the GiA-funded NPOs.

Then in 2014, when total Lottery income stood at an all-time high of £274m, ACE announced that £180m of Lottery money would be used for NPOs’ core funding over the 2015-18 funding round, and that this was their chosen route for offsetting cuts in central Government funding.

Despite the fall-off in Lottery revenues since then, the latest funding round sees that amount increased to £71m a year, amounting to £285m by 2022.

NPOs have exactly the same relationship with the Arts Council regardless of whether they’re funded by National Lottery or Grant-in-Aid.

ACE does not believe this breaches the additionality principle. Its website states: “By using National Lottery funds to support additional activity, we believe that we adhere to the principle of ‘additionality’ that Government funding should be maintained and is an essential part of a mixed funding model.”

It is a position that is unlikely to be challenged by the Government. Speaking in 2013 at a debate on the Economic and Social Importance of Regional Arts and the Creative Industries, former Culture Secretary John Whittingdale told parliament that the arts should not be singled out as exempt from the cuts facing other parts of the public sector, and suggested that allowing the sector to use Lottery funding to plug the funding gap was something that the Government might “look at for a limited period”.

Benefit for the sector

Commenting on the new Lottery funding figures, the GPS Culture team, authors of the Rebalancing our Cultural Capital report on the regional distribution of arts funding, said: “Arts Council England’s decision to prioritise the protection of its NPOs with an additional £285m of clearly substituted Lottery funds over four years might, arguably, have been defensible in the short term as a response to government austerity. However, this additional bonus from ‘flexible’ Lottery funds simply further privileges the same group yet again.

Another £285m for 149 NPOs as diverted Lottery to help government to finance its cuts? That would have DOUBLED Grants for the Arts for the next 4 years. At an average GftA grant of £20,000, that would have supported 14,200 new works and creative participation projects that can't now happen. As a lottery distributor, ACE is no longer fit for purpose.