The funder wants to "embed a diversity of perspectives, skills and expertise" but acknowledges the change may not be happen fast enough for some. 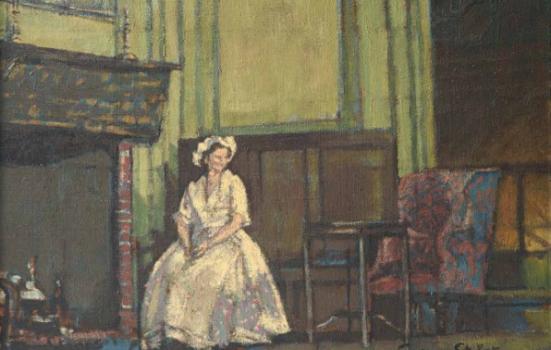 Portrait of Peggy Ashcroft, gifted to the University of Bristol on the AIL panel's advice

Arts Council England (ACE) is slowly repopulating one of its advisory panels to make it more diverse.

The panel, which advises on the value of historically or culturally significant objects gifted to the UK in lieu of tax payments and their placement in museums and galleries across the country, will undergo further changes in 2022.

In 2019/20, the value of items gifted through AIL and the Cultural Gifts Scheme was nearly £65m.

"There is unrealised potential... to ensure that a wider range of organisations across the UK, and their visitors benefit from the best in art, design and heritage," the review reads.

"This potential deserves greater recognition across [the] arts council as it takes forward the delivery of Let’s Create."

Last year's review said the panel at the time "does not reflect the diversity of the UK in relation to gender, sexual orientation, ethnicity, disability, age or geographic location".

Two members whose terms expired in March 2020 were reappointed for a single year "on the provision that [the council]... identify how best the membership of the panel could be diversified".

The review, received by ACE's National Council last December, recommended those members' terms be extended for another two years.

Against plans to make six new appointments before December 2021, just three people have joined the panel.

ACE says new recruitment materials with an "inclusive tone" aim to attract new panel members, and appeals have been made to the Disability Collaborative Network, Museums Detox, Cambridge University Library, and several regional museums and galleries.

"We aim to ensure that the panel holds a range of perspectives, areas of expertise and commercial experience, and its knowledge of collections is drawn from across the UK."

There is a risk ACE's actions "are not percieved to go far enough or fast enough", the review warns.

Released under the Freedom of Information Act, it says recruiting new members alone will not lead to change.

Members are appointed for an initial term of three years, which can be renewed twice more for a total of nine years' service.

Chair Edward Harley, President of the Historic Houses Association, was reappointed to the panel in 2019 for a third term.

He is credited in the review as making "a concerted effort... to broaden the range of recipient organisations" that benefit from the AIL scheme.

Objects, often given in wills, may only be gifted to certain institutions so the panel encourages unconditional offers. Occasionally it renegotiates, as it did to reallocate a Walter Sickert painting from the Tate to the University of Bristol.

The review noted the need for a "clear succession plan" to ensure the panel operates smoothly until Harley's replacement in 2023.

A skills audit of the current panel will determine what gaps need filling.

Traditionally, items' importance has been viewed through an art history or commercial lens - expertise the current panel reflects.

But there is now a need for broader experience in areas such as photoraphy and digital art, the review noted, suggesting ACE engage a wide array of artists, museum educators, conservators, historians and non-English museum trustees.