Feeling the Brexit blues? Abu Dhabi is courting British creatives with a 10 year work permit, routes to citizenship and heavy investment in arts and culture. 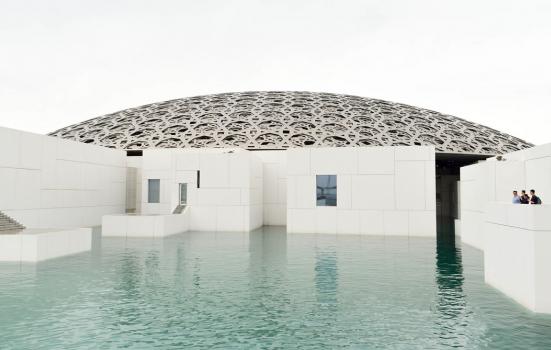 Abu Dhabi is courting British creatives with a new 'golden visa' and a path to citizenship.

Applicants approved by the city state's Ministry of Culture and Knowledge or Department of Culture and Tourism will receive a 10 year stay and rights to work anywhere in the United Arab Emirates (UAE).

Abu Dhabi, a long-time haven for expats, is home to Louvre Abu Dhabi as well as new media and entertainment centres twofour54 and the 60-acre YAS Creative Hub, due to open later this year. Guggenheim Abu Dhabi is planned for 2022.

The push to attract UK creatives is part of a larger ‘Thrive in Abu Dhabi’ programme, which also focuses on healthcare, scientific research and development, and real estate. The creative visa scheme aims to support Abu Dhabi's cultural strategy and further develop its cultural offer.

The renewable visa is described by the Government as “a first step in the pathway to permanent residency and citizenship”.

Creative visa applicants must have a valid employment contract in one of four specialist “priority” fields: media, heritage, performing arts, or the visual arts. They must also “contribute to the creative and cultural industries of Abu Dhabi”.

The visa can include residency rights for the visa holder's spouse and children.

The strategy has five key objectives: to preserve and sustain Abu Dhabi’s cultural heritage, increase awareness of and engagement with arts and culture, stimulate creativity as a driver for education and social change, build capacity in the city's cultural sector, and contribute to its economic growth.

One of the seven emirates that make up the UAE, Abu Dhabi has invested heavily in arts and culture in recent years.

A long-delayed Guggenheim Abu Dhabi, first announced in 2007, is expected to be completed in 2022.

Abu Dhabi's Department of Culture and Tourism was unable to answer questions about why it is targeting British creatives before the publication deadline.

However, Mohamed Khalifa Al Mubarak, the department's Chair, said last week that he sees the creative visa programme as a "mutually beneficial system".

"Abu Dhabi is committed to not just nurturing the creative talent found within our borders but also to extending our resources to innovators from the region and around the world.

"The creative ecosystem of the Emirate plays an important role in all our lives... championing the cultural and creative sectors will continue to be a priority."

Creative education has also become more noteworthy in the region. International institutions with a presence in Abu Dhabi now include New York University and the Sorbonne.

The creative visa scheme coincides with the announcement of this year’s Culture Summit Abu Dhabi, which will take place online from March 8 to 10.

The annual summit was launched in 2017. The theme of this year’s event is ‘The Cultural Economy and the Economy of Culture’.

Mubarak said: “The global challenges of the past year have truly demonstrated the vital power of culture to improve our personal and collective wellbeing.

“It is now more important than ever to shed light on the critical role that the culture sector plays as an essential driver of sustainable economic and social development.”

Partners for the 2021 summit, which is free to attend and open to the public, include UNESCO, The Solomon R. Guggenheim Museum and Foundation, and new for this year, the Design Museum London.

Friday, 17 September 2021
Birmingham 2022 has released details of the six-month festival set to run across the West Midlands as part of the Commonwealth Games. The £12m festival will showcase art, photography, dance, theatre... read more