50% of comedy workers have lost half their income, survey suggests

Comedians are making just 5% of their pre-pandemic income from streamed shows while half of off-stage workers have no live gigs booked, raising questions about the industry's survival. 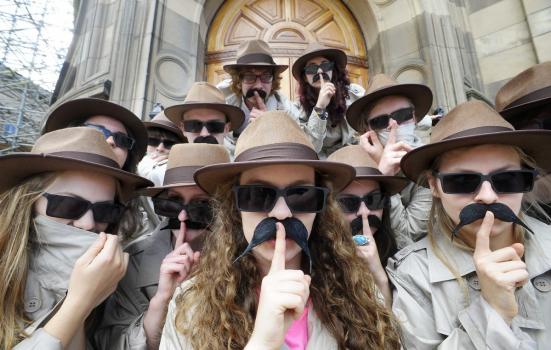 Comedy workers' income has been decimated during the lockdowns, leading half to consider leaving the industry.

The finding is one of several bleak statistics uncovered in a survey by the Live Comedy Association (LCA). 50% of comedians and off-stage workers surveyed lost at least half of their annual income even when government support was accounted for, and 60% made less than 5% of their pre-pandemic income from online shows.

300 of the LCA's 1900 members were surveyed. Most (57%) believed that opportunities for work won't return to 2019 levels until 2022 at the earliest and it's affecting morale: 81% say their mental health has deteriorated since March 2020.

The financial strain has been most acutely felt by people of colour in comedy, 74% of whom experienced severe income loss. 71% of limited company owners also lost more than half their income, as well as 61% of disabled workers and 57% of the self-employed.

LGBTQ respondents, carers, and those earning less than £30,000 per year were more likely to consider leaving comedy, with people of colour again the most concerned (60% of respondents).

Just under half said they had applied for work outside of comedy, but only a third were successful, the LCA found.

The association has launched a fund to provide £500 hardship grants to the most in need, focussing first on the self-employed and workers ineligible for government support.

Co-Founder Owen Donovan appealed for donations: "The more grants awarded, the better the chances of the UK being able to slowly re-establish the thriving comedy industry it is known and loved for."

With the exception of a small period in England last summer, there have been no live indoor comedy shows in the UK for more than a year.

Comedy was excluded from conversations about reopening at that time and was not considered an eligible art form during the first tranche of the Culture Recovery Fund.

After lobbying by the LCA, including an open letter signed by 35,000 people, it was included in other funding rounds.

£5.6m has since been awarded to organisations within the live comedy industry and nine dedicated comedy venues have since received a total of £1.77m.

"If these grants hadn’t been awarded we are certain that some of these organisations would now be permanently closed," the LCA said.

"Many were on the brink of redundancies and unable to keep things afloat for much longer, so the grants were vital to plug those gaps when they came in."

Those venues will all remain closed until at least May 17 and even then, "with planned social distancing regulations, very few gigs and tours will be financially viable," the association says.

When shows did briefly return to England, three quarters of comedians surveyed were offered lower fees - for 44%, the fees fell by half.

Despite the Self-Employment Income Support Scheme (SEISS) being extended last month, only another 6% of comedy workers have been able to access it, the LCA's survey indicated.

Unlike other live art forms, comedy has had little success transferring to digital. Only 45% of comedians surveyed have been able to monetise their own content.

Even as the industry looks to restart, there are few opportunities for off-stage workers. About half haven't been offered work on streamed shows and have no live work scheduled in the next six months.

Due to the nature of the industry, it is hard to estimate how many people worked in comedy pre-pandemic, the LCA said.

"It’s something that we’ll be trying to assess as the industry re-opens again."