Music teachers are putting their health at risk to continue provision under inconsistent and unclear Covid safety guidelines. 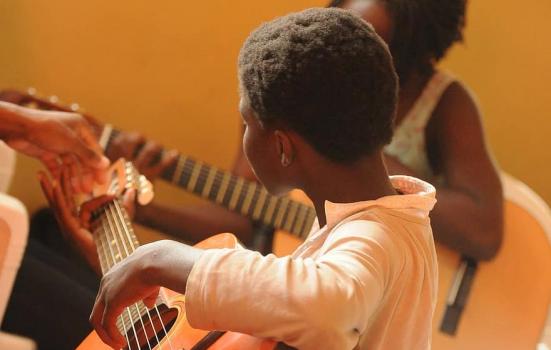 One in 10 schools aren't teaching music due to Covid-19, a survey of music teachers suggests.

Teachers said they were putting their physical and mental health at risk in schools where practise rooms have been repurposed as Covid holding bays and instrumental lessons are banned due to safety fears or space and time constraints.

In some cases, teachers have been told not to use NHS Test and Trace in case it triggers a period of quarantine and absence from work.

"As a teacher you constantly have to choose between teaching effectively or being selfish and protecting your health. It’s an impossible choice and I find myself risking my health out of guilt for the pupils’ situation more often than I should," one teacher quoted in the survey report said.

The Incorporated Society of Musicians (ISM), which conducted the research, said provision has dropped despite requirements for schools to deliver a "broad and balanced curriculum" post-Covid.

The association largely blamed guidelines for music teaching in schools, which have been "at best inconsistent and at worst non-existent".

"We were disappointed but not surprised," Chief Executive Deborah Annetts said.

The Department for Education did not address the survey's findings directly: "Our guidance is clear that we expect all schools to teach an ambitious and broad curriculum in all subjects – including music – and it’s encouraging to see more and more schools engaging with Music Education Hubs over the course of this term."

The effect of Covid-19 on music education has been most pronounced in Scotland, where restrictions on singing and brass and wind instruments are tight.

According to survey respondents, extracurricular music is not taking place 72% of primary and 66% of secondary schools - a rate that falls further still in Scotland, Wales and Northern Ireland.

But while about 25% of primary schools and 5% of secondary schools in Scotland had dropped classroom music for some or all year groups, in England that percentage was more than 70% and 80% respectively.

"Teachers in Northern Ireland... have had to approach local public health departments and councils for permission to resume teaching."

Ofsted Covid-19 briefings illustrate how pervasive and widespread the lack of music teaching has become. A September paper says safety concerns meant school leaders were "struggle to work out how to include practical subjects", including music.

ISM reports that 8% of secondary music teachers have been asked to teach subjects other than music this year.

Despite school guidance allowing visiting instrumental teachers, 10% of respondents in this field weren't teaching at all amid fears about the integrity of students' contact bubbles and a lack of space to hold socially distanced lessons.

Students are instead being asked to pre-record their work at home to discuss with their tutors, an experience they find "off-putting and awkward".

Some secondary school students have no access to specialist teaching rooms and equipment or the technology and instruments to practice at home.