Stella Kanu of Ovalhouse reflects on the institutions, lofty ideals and ninja-like women who have shaped and guided her career. 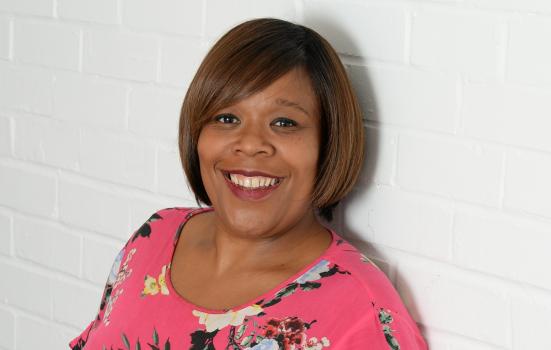 Generation Xers, like myself are uniquely designed to be influenced by movements and ideas rather than individuals – it’s just how we roll! So, I’m clear about my influences but they are not ‘single-person-guru driven’ as a rule. Black leadership, especially BAMER female leadership, is often created and sustained without mentorship. We are frequently overlooked at the right (emerging) time as mentees in organisations, so often our influences tend to be ‘other’.

Ovalhouse has always been an important space for me. It was the first place, as a pre-teen, that I saw theatre being made. I watched Giles Agis, CEO at Brouhaha, and comedian Jim Sweeney apply heavy makeup through huge smiles and lots of laughter; and groups of (mainly men) filling up the dressing room and public spaces with Marcel-influenced mime. It was a heady place for a teen.

Led by Roz Price and Alphi Pritchard, Theatre of Black Women, Black Theatre Co-op and LGBT workshops on political theatre at Ovalhouse supported my youth work practice and my own artistic development during the 1980s. By the time I went off to university, I was equipped with skills and ideas, and ready to use them.

It’s amazing to be back at Ovalhouse, leading the strategy for our new artistic life for the 21st century and our new home in Brixton for 2020.

My recent long-term partner, aka ‘Blu Uk Jazz Dance’, is an exception to the individual guru rule. He is an amazing Manchester-based artist who just keeps going. An exceptional creative leader, he has incorporated his strategies for overcoming his learning disabilities, and some physical ailments and injuries, into great philosophies around personal leadership.

As a trained and social dancer he finds his answers physically, through the body. Me, I am totally cerebral! It was both fascinating and challenging to get out of my head and into my body as a playful space of refuge and solution – something I still feel can be scary for many women.

He is also a beautiful dancer and an awesome man, and I owe him a lot. We certainly made the most of our relationship as a way to understand our careers and who we are as creative leaders.

I am lucky to know some awesome, powerful, humble, serious, ninja-like black female arts professionals who are really changing their worlds through culture. Theatre and dance producer Oluwatoyin Odunsi; Upswing founder and circus genius Victoria Amedume; Gaylene Gould now at BFI; Diane Morgan, Director at NitroBeat; and Selma Nicholls, CEO and Founder of Looks like Me.

My sister Angela is a social worker, working with Aboriginal families in Australia, and another great inspiration. Often our conversations about young people, culture, childhood, racism and systems of oppression find their way into my project ideas and narratives about class, diversity and action. The cultural trauma and lack we experience when faced with the true effects of poverty and system blindness show up in community work all the time.

The Cultural Leadership Programme, then led by current Clore Leadership Director Hilary Carty, was a huge incubator for my development. I allowed myself to dream big and be inspired even though the ‘work’ opportunities were thin on the ground outside of my desire to develop the hell out of black leaders until they shout “Stop!”. I am very lucky and it’s a rich source that I don’t take for granted. We talk serious, but we also play hard – which is the key to happiness I’m told. Top tip.

I have some pretty lofty ideals about the role of culture in society. I blame my parents and the community elders around me as a child. I’m not religious, but I do believe that part of the transformational, personal depth we often find as artists, creators, observers and receivers of art is deeply spiritual.

I have visited shamans of all cultural backgrounds, learnt about eastern, western and African beliefs about health and mental strength. I learnt massage and Reiki, and used this knowledge to design workshops and engage. It’s pretty powerful, but simple.

It is a lie that our societal and familial broken parts don’t harm us on deep, sometimes hard-to-repair levels. Harmonising the souls of our children, our communities, our broken and even high-achieving adults has got to matter. How else will we heal from the devastating effects of lopsided wealth creation, and the personally and familial trauma associated with poor housing, poverty and lack? When we reach our potentials, will it be in a bubble made by our own hands? Or something much richer, much more collective in nature, but built on feeling personally and individually strong and empowered.

Health and wellbeing is so popular now and I think that is due to the consistent influence of a movement that frequently has to fight negative stereotypes about itself. At some point in history and in other cultures artists have the same status as priests. That does not surprise me one bit.