Phoenix Dance Theatre’s Sharon Watson tells us about the people who have guided and inspired her pioneering career. 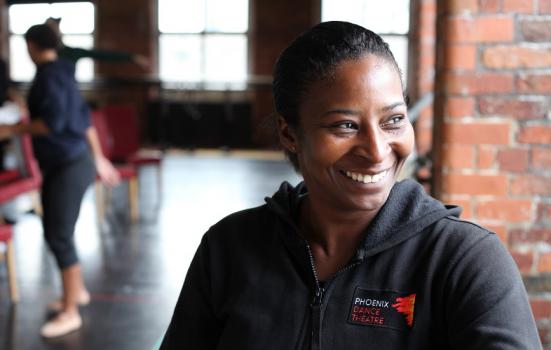 It resonates even now, although we met when I was 9, Nadine is absolutely the most inspirational woman I have ever come across. She was a P.E. teacher at my school, Harehills Middle School in Leeds, and hugely influential in putting dance on the curriculum. That was the beginning of my career. My peers and I were first generation inner-city black kids and she embedded in us an ambition to do something other than what was expected of us, something different. A substantial number of those dancers went on to make what would become known as Phoenix Dance Theatre.

Nadine founded the Northern School of Contemporary Dance in 1985, specifically for kids like me. The influence she has had on the dancers that have been through her school and under her leadership has been immensely powerful and life changing. It’s just amazing. She has a gift in understanding how to bring the best out of people.

Darshan ought to appear several times on my list. I have learnt from and worked with him several times throughout my career and I continue to learn from him. Darshan is one of the most phenomenal dancers: he’s run his own dance company and he creates astonishing choreography. I have danced his work which was an absolute privilege. I was under his creative wing for nearly five years and he gave me the freedom simply to explore and develop my skills in leadership. There really is no one way to mould an artistic director and Darshan encouraged me to grow and develop my own style.

Maggie took on the role of Artistic Director of Phoenix Dance Theatre in the 1990s. What was interesting about her was that she had a mind that focused on infrastructure. As a white American, she started to change the perspective of what the company could become. There was some controversy around her leading an all-black company but there was something about her vision and the organisational structures she set in place that enabled the company to function differently. She gave the company a much-needed balance, instilling in it the importance of the health and wellbeing of the dancers. She didn’t fear those who challenged her, she embraced them and tackled their concerns head on. Maggie really did the ground work and made difficult choices. I often reflect on our time together and delve back into our journey for inspiration. Having been guided and supported by Maggie I recognise similarities in my own leadership style.

Maggie has since formed Safe in Dance International, working to ensure that everyone involved in dance works in a healthy, safe and supportive environment. Maggie really cares both about the human being and the dancer.

A lot of dance artists come and go, but when I close my eyes and think of Silviu’s ‘Faust’, which I saw in Romania in 2007 whilst studying for my Masters, I can still feel it now and it resonates within me. There was something so immersive about his movement and I remember feeling both excited and vulnerable. The opera wasn’t in English – I didn’t understand a word of what I was hearing – but it didn’t matter because it was truly magical and I sold my soul to the devil. That’s the only work of his that I have ever seen but he created something that gave me an emotional and physical reaction and I would love to work with him one day. Truly immersive theatre.

As a place, London Contemporary Dance School changed my life. I went as a fifteen year old on work placement, which is almost unheard of at such a young age. I was testing the waters, trying to decide if I could make dance my career and, of course, I loved it. The teaching I received there was as close as I could ever have come to being taught the Graham technique by Martha Graham herself. One of the greatest artists of the 20th century, Martha Graham fundamentally reshaped modern dance and a good number of the teachers at the School had been taught by her, or experienced close connections with her company. At London Contemporary Dance School I was exposed to a level of creativity that I had received only limited exposure to in the North. I knew I was talented but the School surrounded me with people who were much more talented than me and I found that incredibly inspiring.

I was fortunate to be in and amongst a new movement of contemporary dance in England which was brought to the UK by Robert Cohan CBE who is now our patron at Phoenix. Amazing circles, I could not have planned it any better.