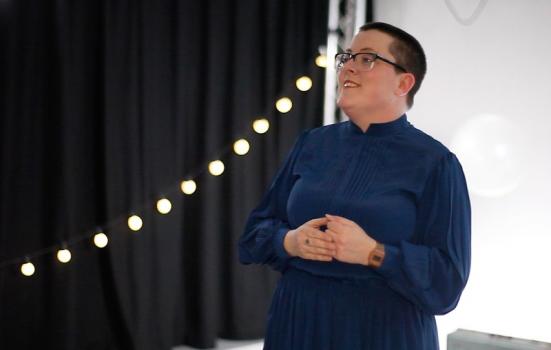 I grew up in a small village in South Wales, in the days when studying drama at GCSE or A Level in such a place was impossible. Instead, I buried my head in play texts and books about theatre and dance, mostly fed to me by my outstanding English teacher and my first Guru, Mr Millington. He offered a steady supply of ideas and subject matter; I have a vivid memory of being in the school library with a huge and heavy book about Merce Cunningham, taking in the detail with wide eyes and a head full of questions to pester Mr Millington with later. I read Shakespeare, Beckett, Osborne and Ayckbourne texts aloud in my bedroom, imagining a world in which I could do this for a job. Mr Millington died when I was doing my A Levels and I was bereft – he’d opened up such a wonderful world to me.

I studied English and Drama at the then Queen Mary and Westfield College, and met performance artist Lois Weaver in my first month there. She performed an extract from her solo work ‘Faith and Dancing’ for us, which ended with her naked on stage. What I know now to be a clever ploy to encourage us to leave our preconceptions of performance studies at the door, was a pivotal and important moment for me – I had no formal theatre education up to this point so I had no preconceptions to leave! I feel so privileged to have been taught by Lois; she is a true performance pioneer and feminist.

I was also lucky enough to be taught by the late Lisa Jardine – a powerhouse academic and thinker who left an indelible impression on me. We exchanged a high five and a wink on stage at graduation – a fun moment amongst the pomp and rituals. I’ll never forget it.

At around the same time I met the man who has had the deepest and most lasting effect on my career: Ali Campbell. A specialist in Forum Theatre and Theatre of the Oppressed, Ali was mentored by Augusto Boal and introduced me to socially engaged practice and the prospect of using theatre to affect social and political change.

Under his tutelage, I carved my own corner in the field. I collaborated with Ali and the great Augusto himself, and companies such as Proteus Theatre before coming to work for Studio 3 Arts and developing my own interpretation of Augusto and Ali’s work in a very specific socio-economic climate in East London.

Since becoming Artistic Director of Studio 3 Arts in 2009 I’ve expanded my gurus list to include those who support and mentor me, not just as an artist, but also as a leader of a cultural organisation – in particular Anamaria Wills (CidaCo) and Steve Moffitt (A New Direction).

Artistically I love work that serves to tell hidden or under-represented stories and people, or in some way serves to redress inequality, oppression, colonisation or injustice. The work of artists and writers such as Gil Scott-Heron, Ashley J, Chris Bracey, Jade Hackett, Chinua Achebe, Scroobius Pip, Madani Younis, Bobby Baker, Matthew Xia and Margaret Atwood inspires and energises me to continue the challenge to democratise art and theatre.

I’m really relishing my collaboration with Angela Michaels at the moment – Angela is directing Studio 3 Arts’ forthcoming promenade production of Merchant of Venice for July this year. She really ‘gets’ Studio 3 Arts way of working and understands the need to ensure local voice is central to the creative process. The show will bring together eight professional actors with a huge community company. I can’t wait to see it!

Finally, my last guru to mention is a young musician and actor called Kevin Mukendi, who I mentored for many years at Studio 3 Arts, first as a participant of our youth programme and latterly as a professional performer. Kevin died in 2014 after a short period of illness, aged 21. His talent and commitment to his craft was unparalleled – he challenged me to keep learning, keep asking questions and to never take anything for granted.