A deadpan Indian humourist, a Finnish psychologist and a mischievous artist: theatre makers Jon Haynes and David Woods look back on their career gurus. 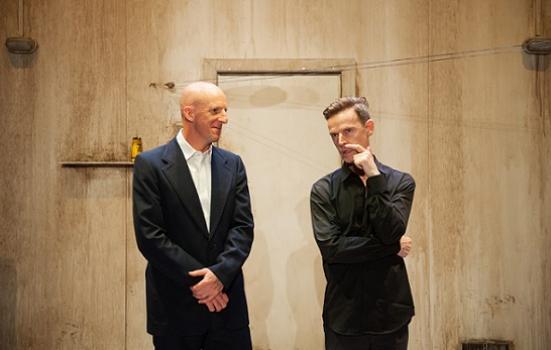 We were at a physical theatre symposium in Liverpool, struggling to articulate our artistic vision, when we stumbled across a mercurial elf-like being who managed to convince us she was the Mozart family. In my memory she did this while rattling off a few sonatas, conducting an orchestra and holding a mistress class in mime - for that is her field of expertise, one that we in Ridiculusmus had until that point in our lives mercilessly sent up. Nearly twenty years later she turned up at the Albany in Deptford to see us perform Give Me Your Love, and I’ll never forget the way she demonstrated to me afterwards how to project my lines from the wings. She is quite simply incomparable.

Starving and homeless in the early touring years of our life as Ridiculusmus, we were housed, loved and nourished by Pat and her partner Norman. They lived with their cat Digit in a rambling house in Burton Bradstock when playing the village hall circuit in rural Dorset. Latterly Pat became our surrogate mum, accommodating us, our plays (Tough Time, Nice Time premiered in her bath tub) and our wayward associates’ home brew alcohol needs.

A fiercely proud socialist, social activist and the only leftie in West Dorset until Billy Bragg moved in; Pat could captivate you for hours at the kitchen table with conversations that you realised afterwards were all about the building of an artistic community without borders.

Relentlessly positive, she would take enormous pleasure in peeling a banana.

She has been described as a female Sean Penn and as being touched by genius, but she is actually a phenomenon, an irrepressible bundle of joy whose peculiar and virtuosic brand of performance can be witnessed in the successful cabaret night - Phantasmagoria - she curates at Hoxton Hall, as well as her many appearances in various other venues around the country. There is something undeniably infectious about the dedicated sense of mischief and the truly improvisational spirit she brings to her collaborations. We’ve worked with her several times and will continue to do so, as we never fail to learn from her spontaneity in the devising room.

Faced with a cultural identity crisis entirely of our own making in the early 90s, we set off on a quest for enlightenment to India. Cramped, sun stroked and stressed out, we craved sanctuary and, thanks to an enticing entry in the Bangalore Times What’s On listings, discovered the International Humour society, Bangalore chapter, led by one YMN Murthy, industrialist (retired).

The evening rolled out around an extended delivery of sub-standard pun jokes such as one might find in a Christmas cracker or Tim Vine show, delivered in this case without a dollop of pudding to chase it down or the electric speed of a stand-up slickster. No, these were painful, ponderous, nay meditative, deliveries of a self-styled humourist who had gathered a small but devoted following of similarly retired suburban gentlefolk. Murthy nominated himself President of the society (which had no other chapters) and claimed the 'international' tag on the basis of his bilingual English/Hindi jokes.

We were entranced and promptly set up the first overseas branch armed with a suitcase full of stickers quoting Murthy’s homophonic aphorisms. We corresponded regularly by handwritten letter until his death in 2006, urging each other to greater heights of undeterred hopelessness. In his honour we named a character after him in Yes, Yes, Yes and toured the work for thirteen years.

I will never forget the first time I saw Jaakko. He was standing before an audience of several hundred psychotherapists at a dialogic conference in Finland about to deliver the keynote speech. He surveyed the room for several minutes and then said ‘Any thoughts?’ It was about the most succinct demonstration of Open Dialogue that you could get. Open Dialogue, I should add, is a mind-bogglingly simple treatment method for psychosis that involves sitting with a group of people and talking, and it has impacted on our lives beyond measure.

David Woods and Jon Haynes are co-Artistic Directors of Ridiculusmus.

The UK premiere of Ridiculusmus’ Die! Die! Die! Old People Die!, the final show in the company’s mental health trilogy, is at Battersea Arts Centre from Wednesday 8 to Saturday 25 May at 7.30pm. The whole trilogy will be performed on Saturday 25 May from 12pm.