Unlimited’s Jo Verrent reflects on who has inspired her passion for equality and diversity, and why she’ll be getting her first tattoo this year. 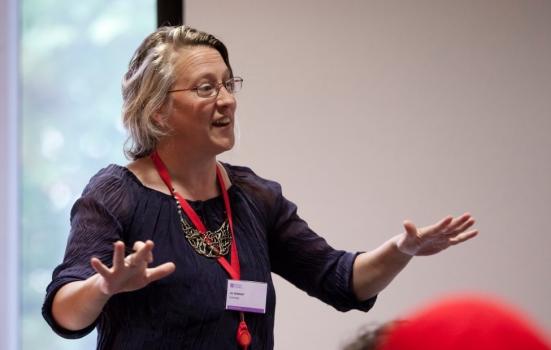 I still remember the hairs on my arms standing on end the first time I heard Julie’s voice – and she was only sound checking. I’m a hearing aid user, had just ‘switched on’, and suddenly I heard the sound of an angel. Later, when I understood the words she sang, I fell in love all over again – powerful, necessary and often devastating.

I still listen to ‘Fly Like an Eagle’, as I’ve never found anything else that helps me get through hard times as much. Along with other heroes of the disability arts scene in the 1980s and ‘90s – Caroline Parker, Tony Heaton, Heart n Soul, the Lawnmowers – she helped me find my way into a movement, and then into the arts sector itself.

I’m delighted that the work and stories of that time are being collected by Shape’s National Disability Arts Collection and Archive, so it doesn’t disappear and so I can revisit my youth on demand!

Everyone at Watershed I’ve ever met

I met Dick Penny, Managing Director of Watershed, when I was trying to persuade him to partner up to make some films. I’d not met Dick before and I’d not made films before, but he made space and time to listen to me – and we ended up forging some great work together (which is still online).

Watershed has an ethos that everyone should be ‘professionally interruptible’, which translates to status having no bearing on a good idea. Everyone I have met at Watershed carries this through – they are open, discursive, ready both to teach and learn.

I adore them all: Clare Reddington, Oliver Humpage, Rachael Burton, both Davids, Haylock and Redfern, Verity McIntosh – pretty much everyone I have ever met there including associates and residency holders like Laura Kriefman and Stuart Nolan, all of whom live up to this value. I’ve tried to take it forward in everything I do over the past eight years.

This year I went to Frida’s house in Mexico City and just cried. To be where she lived, where she created, where she tore up the rule book and found her own way. To see the bed she often painted from, with a mirror fastened to its canopy (much of her work was self-portraiture). To see her self-decorated prosthetics and casts; her incorporation of every aspect of herself into her work. She had no boundary between work and home, between art and life.

Her work – both words and images – dramatically influenced me, showing me it wasn’t just a right to be who you were, but often an artistic necessity. And that the resulting work could be astounding.

“Feet, what do I need you for when I have wings to fly?”

I’m on a constant quest to make stuff better. A fact that those who I work with tease me about (‘Oh, another evaluation? Another set of lessons learnt?’). I think that’s the whole point of being here; of being alive. We live, we learn and we try and make things better.

I was working with the amazing Sarah Pickthall developing training courses when we met Hilary Carty from the Cultural Leadership Programme. She was a genuine risk-taking agent for change who very much believed in challenging the status quo and putting power in new places. Through her we developed Sync, a leadership programme for disabled arts workers, which ran in the UK for six years and has run since in Australia and will soon be run in Korea.

Mark Wright was an important part of that journey too – encouraging us to learn from and not be frightened of so-called ‘mainstream’ leadership development, but to dig deep into our difference and foreground it. For me, this journey continued and deepened as part of my Clore Fellowship, which enabled me (finally) to be confident in who I was and what I could deliver.

My last guru to mention is my eldest daughter. She called me out about diversity, pointing out that my actions were only skin deep – literally – when she started getting tattoos. I hated them at first and really struggled with the idea of her marking her body so permanently. She reminded me that if I believed everyone had the right to be different, that had to mean everyone.

This year I’m getting my first tattoo and she’ll be next to me holding my hand. It’s a way of showing her I respect her choices – and everyone’s right to be different.