Birmingham Royal Ballet’s David Bintley remembers Frederick Ashton and others who have shaped and guided his career. 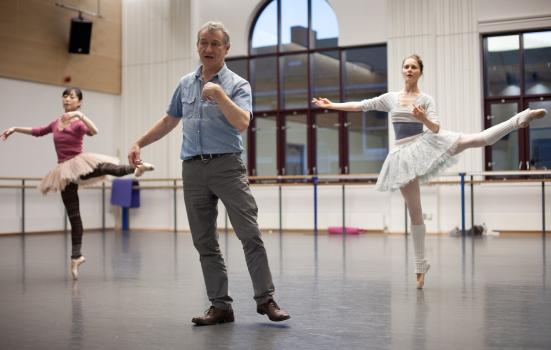 Together, Ninette de Valois and Frederick Ashton were the great architects of the Royal Ballet. Not only did they embody the entire history of the company, and its beginnings at Sadler’s Wells, but they went even further back. Continuity is vital to an art form which is passed down through the generations, and I was very fortunate to be part of that last generation that actually worked with and knew them.

I’m a big ballet history fan, so to hear stories first-hand from these great figures who saw Pavlova dance and were choreographed on by Nijinska was wonderful. I was especially lucky because for some reason I also enjoyed their favour and mentorship.

Another link in the chain is Peter Wright, not only because of his remarkable achievements, but also because of his longevity. Peter was a dancer with the Kurt Jooss company, another legendary figure in ballet history. Peter gave me my first job, my first principal roles and, within six months of joining the company, the opportunity to choreograph.

I’m full of admiration for him because, even at ninety, he’s absolutely tireless. I remember being in Munich when Peter’s production of The Sleeping Beauty was due to open in a couple of days. The company thought they had got the production together, but Peter certainly didn’t agree! For two days, he tore into them from morning until night. It is tiring what we do, when you have to grab a company and drive it towards opening night, but the best way to do it is to be tireless yourself. It’s easier if you just tear into it, knuckle down and get on with the job – and that’s what Peter taught me.

Before I joined the Royal Ballet School, although I had some very good teachers, I’d never been taught by a man. Once I started full-time training, I was taught by three of the greatest male teachers of the time.

Walter Trevor was a no-nonsense, bread-and-butter teacher who took my ‘regional’ training and made me employable as a male dancer.

Terry Westmorland was a fantastic, very musical teacher. We loved working with him because he often taught the Royal Ballet. We would regularly have people like Lynn Seymour and Desmond Kelly joining in because they loved his classes so much. It was such a thrill to have one of the greatest ballerinas of the time doing class with us.

Thirdly, and probably most importantly, was Piers Beaumont. Piers was a strange character; he’d been injured out of a dance career long before and was about 7 foot tall. Piers loved to theorise and create mental images to help us achieve the work. Even to this day, I quote him to dancers because his ideas were so remarkable.

Cormac was the Presentation Editor of Radio 3 from 1972 to 1985, before becoming a parish priest. An extremely educated, brilliant man, he was devoted to the theatre. He was a big fan of the Royal Ballet but didn’t have a correspondence with me until he heard I was Catholic. I went to his ordination in Westminster and he then invited me to see a very young Mark Rylance in Hamlet and, thereafter, we developed a friendship based around theatre-going.

I don’t know if Cormac deliberately took me to things that would inspire me, but so many plays that we saw together were an influence. For example, these trips included the first time that I saw Edward II and realised it had to be a dance piece.

Cormac had thousands of friends; his funeral was standing room only and was virtually a roll call of theatrical life in London. I can’t imagine what his diary must have looked like; he knew everyone in theatre and dance.

And finally, a guru is a spiritual teacher, but nothing and no-one has taught me more about life, and protected me more from its vicissitudes, than my family. I’m not being sentimental. When you are responsible for supporting a life partner and raising children, suddenly it’s not all about you; there are things more important than work and art.