Tom Velvick looks back on how a career that began in advertising has now led to him overseeing the "all things to all people" arts label Dead Man. 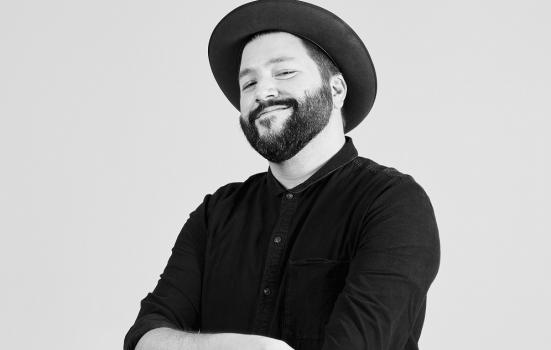 I studied visual communication for four years at Kingston before entering the world of advertising, straight after university, at 21. It was an industry I had always been drawn to, as I loved the diverse nature of generating ideas, and the creative challenges this presented. I worked on projects for companies such as Honda, the Guardian and Nokia, as well as being Art Director for two of Nike’s biggest UK football campaigns.

I always struggled with the conditions that clients put on briefs, so I would end up creating two campaigns: the first stuck to the conditions they had specified and was exactly what they asked for, and the second was what I thought they needed. Clients can be, rightly or wrongly, risk averse – but true great work comes from being bold and brave.

I learned the trade from my mentor Paul Arden, who is the author of the books ‘Whatever You Think, Think the Opposite’ and, ‘It's Not How Good You Are, It's How Good You Want to Be’, and considered the godfather of modern advertising. I thought my path was clear - I would be a lifelong ‘ad man’. But as it turns out, I haven’t worked in advertising for 7 years. It was Paul who always said, “Don't be afraid of silly ideas” and “risks are a measure of people” - so I went rogue, surprised everyone and founded Dead Man Label. I haven’t look back since.

I created Dead Man Label as a ‘multi-disciplinary arts label’ (which is a bullsh*t, all-encompassing definition that can mean all things to all people) with the precise intention of trying my hand at all things. I see it as a collective of performers, designers, musicians and artists assembled from the festivals, dive bars and back alleys of the world. I’ve always had a love of music, design and comedy, and this company has allowed me to work alongside fantastic performers. I create, I produce, I direct, I design, I write - I do it all, and I don’t really have a job title.

Dead Man shows have performed for sell-out audiences all over the world: from Hong Kong to Amsterdam, Edinburgh to Auckland. They have headlined the International Buskers Festival and the Underbelly Festival on London’s Southbank, toured Europe, and created mayhem in Spiegeltents in cities all over Australia including Melbourne, Perth and Adelaide.

Dead Man acts have shared a stage with Amanda Palmer, Tim Minchin and The Tiger Lillies, and have played at Glastonbury, Latitude, and Bestival. They have been heard on the airwaves of BBC Radio, and appeared on BBC3 TV’s variety show Live at the Electric, and in Australia, on ABC2’s Comedy Up Late. They have graced the front covers of Time Out magazine and the Scotsman, and appeared in the pages of the Guardian, the Independent and the Daily Telegraph.

I’ve also created pop-up bars. The Darkroom, inspired by my love of photography, was an immersive dive bar hung floor to ceiling with some of the most infamous and provocative photographers of the 20th and 21st centuries, and bathed in red light. I’ve programmed arts festivals, curated venues, and even been commissioned to create art walls for the likes of Paolozzi beer and reality TV star Jamie Reed.

For the past 18 months, I’ve been focusing on one show in particular: ‘Little Death Club’, which I co-created, directed and produced. The show is inspired by the Weimar Republic’s dens of iniquity, gender bending sexual freedom and celebration of difference at a time of political turmoil.

We’ve created the ultimate modern cabaret club where punks, freaks and weirdos can come out to play, with a completely original soundtrack performed by our Weimar punk house band. The show premiered at the 2018 Edinburgh Fringe Festival in Underbelly’s Spiegeltent. It set records as one of the most successful cabaret shows ever, and finished in the prestigious ‘Top 10 best reviewed shows 2018’ out of nearly 3800. We’ve taken the show to Perth, Adelaide and Melbourne, and are currently residing on London’s Southbank for a 3-month season.

Who knows what will be next? For now, I am enjoying the diverse nature of this new path and not knowing exactly where it will lead. As long as it is creatively-driven, bring it on!