Maria Balshaw describes the career in visual arts and academia that led her to become Director of the Whitworth and Manchester City Galleries. 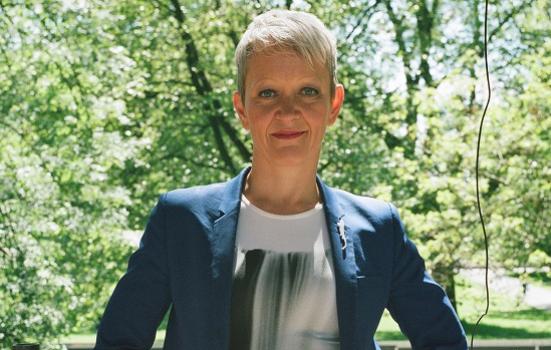 My career has not really been a ladder. Or at least it has appeared to be at least three ladders, erected by someone who hasn’t had their ‘Working at Heights’ training, with an invitation to jump from one to the next at crucial points. Perhaps that is how I’ve liked it.

I went to Liverpool University to read English. A formative encounter with Liverpool’s Video Positive festival provided the content of a First Class essay and the realisation that I actually wanted to study culture. A feminist film theorist, Linda Williams, and an inspirational cultural studies lecturer, John Thompson, directed me towards Sussex University, where I encountered the institutional ferment of queer cultural studies and the films of Derek Jarman and Isaac Julien. Research grants allowed me to do MA and then PhD (on the visual culture of the Harlem Renaissance), and I secured a lecturer position at Northampton University in 1994, before I had completed my doctorate.

Its completion wasn’t aided by a full-time programme of cultural studies lectures to 400 students at a time. The trust and support of colleagues like John Phillips and George Savona meant I swam rather than sank, and have never found public speaking intimidating since. The arrival of my son Jake in 1997 proved to be the motivation for completing the thesis – I belong to the Paula Radcliffe school of women who go faster after they have had children.

Moving to a research position at Birmingham University in 1997, I imagined that academia would be my career for life. Another child (Lily) and three books later, an email arrived from my formidable Aunt Sylvia, then Director of Jubilee Arts, “you should look at this job – it would suit you”.

My first jump across ladders. I applied for Director of the newly set up Creative Partnerships programme in Birmingham. I realised that it is sometimes good to think you only have an outside chance. Using a photograph of my then husband age 7 dressed as a postbox (as an illustration of ‘thinking outside the box’), isn’t something I’d have done if I’d thought I was a ‘serious’ candidate. Peter Jenkinson, the National Director of Creative Partnerships, laughed until he cried and I got the job.

Birmingham has a large, lively and opinionated arts sector, and although everyone welcomed the initial £2m investment in bringing arts organisations and artists into partnerships with schools, I rapidly learnt a tremendous amount about how to inspire, persuade and cajole unlike partners into common goals. Dorothy Wilson mentored me, Sally Luton created a context within Arts Council England that allowed the Birmingham programme to thrive. I also got to work with colleagues who are now life-long friends: Mark Ball, who took Fierce Festival live art into special schools and nursery settings; Rob Elkington, who defected from Theatre in Education to become part of the Creative Partnership team; and Ann Gallagher and Lee Fisher at Birmingham Royal Ballet (BRB), who helped us to create a musical theatre piece, Safahr, by and for young people that Michael Portillo described as his theatre highlight of the year.

It was the BRB Chief Executive Derek Purnell who helped me make my next jump. I had been selected as one of the inaugural Clore Leadership fellows. He offered me a leadership placement on the condition that I told him the job I really wanted. I demurred, but “Do you want to direct Ikon?” was his very direct challenge. I didn’t, as Jonathan Watkins does that job frighteningly well, but it planted a seed about the possibility of (academic) visual culture meeting life in the cultural sector.

So when head hunters called about a Director for the Whitworth, Manchester’s university art gallery, I didn’t say I haven’t got the experience for that. I took a deep breath and jumped ladders again, and I’ve been at the Whitworth almost nine years. I’ve shaped a university gallery that draws on scholarly knowledge and its formidable collection, and shares it with joy and curiosity with the very diverse communities that surround us in Moss Side and Rusholme. I’ve also led a £15m capital transformation of the gallery to better connect it to our surrounding park. Four years ago I was asked to also direct the wonderful Manchester City Galleries. Working together we have been able to make Manchester one of the most exciting places for visual arts in the UK.

The new Whitworth opens on February 14th, so people can fall in love with the gallery again. My time in Manchester has also been a falling in love with the city and its culture. Colleagues like Alex Poots at Manchester International Festival, Dave Moutrey at HOME and Fiona Gasper at the Royal Exchange make the city a dynamic and sociable place to make culture. Reporting to the Manchester Powerhouse trio of Sir Howard Bernstein (CEO), Sir Richard Leese (Leader) and Professor Dame Nancy Rothwell (Vice Chancellor) means work is always changing for the better. No more jumping ladders for now.