What does a week of juggling rehearsals, script writing and embarrassing writing trousers look like for Sarah Page? 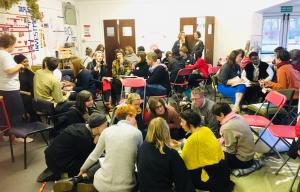