The casting of deaf actor Charlotte Arrowsmith in a current RSC production illustrates how committing to diversity does not mean being worthy or boring, says Jonathan Knott. 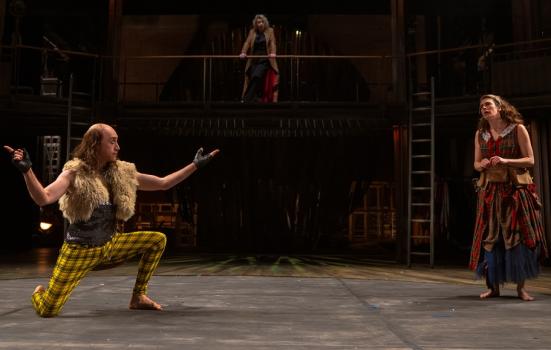 A scene featuring Touchstone and Audrey in As You Like it
Photo:
© Topher McGrillis

Much of the current Royal Shakespeare Company (RSC) production of As You Like It – including the famous ‘All the World’s a Stage’ speech – is set in the dreamlike Forest of Arden. Throughout the play, the forest acts as a counterpoint to the court of Duke Frederick, where early scenes unfold. It is a place where the conventions of the everyday world are held up to scrutiny and often undermined.

The way that social roles can limit and complicate communication is examined in the play’s central storyline, as Orlando expresses his love for Rosalind with clumsy poetry posted on trees. But it is only when she is disguised as a man and he cannot recognise her, that he actually reveals his feelings to her.

Another way that this exuberant and good-natured production explores these ideas is through the casting of deaf actor Charlotte Arrowsmith as Audrey, a simple goat-herd who attracts the romantic attentions of Touchstone, the jester from Frederick’s court.

The interactions between Touchstone and Audrey focus on the social, cultural and linguistic barriers between them – and Arrowsmith’s use of British Sign Language (BSL) dramatises and adds another dimension to this dynamic. Touchstone’s line “I would that the gods had made thee poetical”, and Audrey’s response “I do not know what 'poetical' is: is it honest in deed and word? is it a true thing?” can be seen in a completely different light when exchanged between a hearing actor and a deaf one.

In fact, sign poetry – as Arrowsmith writes in a feature this week for ArtsProfessional – is one of the elements that she is incorporating into her performances with the RSC this summer, alongside sign theatre, physical theatre, sign mime and BSL. (She is also acting in another RSC production, The Taming of the Shrew). In As You Like It, an interpreter (another actor) translates the lines between the two characters. As well as adding to the drama, this means that audience members without BSL are able to understand Shakespeare’s words as well as drawing meaning from Arrowsmith’s performance.

Although the casting of deaf actors in mainstream productions is rare, it is on the increase. As well as her roles for the RSC this summer, Arrowsmith also acted in the company’s production of Troilus and Cressida last year. And Seattle’s ACT Theatre is currently staging a Romeo and Juliet production in which Romeo is played by an actor who uses American Sign Language.

The production I saw certainly indicates that committing to diverse casting, as the RSC has done this year, does not come at the expense of artistic quality. But more than this, it also helps to change the narrative around diversity – which is often discussed in a highly ethical terms, using language of responsibilities and rights. This is absolutely necessary. But there is a danger that by framing diversity as an obligation, we lost sight of the fact that it is also an opportunity. Like the Forest of Arden, it offers the chance to upend existing assumptions and discover new possibilities.