He’s been called Nigerian, Black British and oyinbo, but Inua Ellams just feels normal. He calls for the destruction of ‘othering’ classifications. 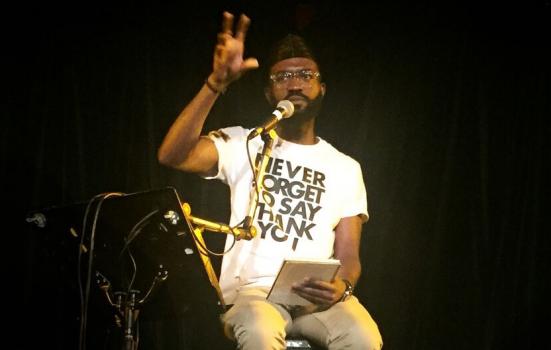 I was born in Nigeria in 1984, left for England when I was 12 years old, for Ireland when I was 15, and returned when I was 18. Throughout those years I dreamed of becoming a visual artist and spent most of my time drawing and painting.

When I returned to London in 2002, money was so tight that I could not afford art materials. University was a pipe dream. Still wanting to create, to construct with my hands, I started writing and performing poetry, wherever and whenever I could. It got me out of the house, kept me out of trouble.

After five years, I moved on to longer monologues, which became one-man shows. Three years later, I moved on to writing for radio; stage plays performed by others. I’m currently working on a libretto and BBC series.

As I stared, I saw a metaphor for the Xavier Institute or Magneto’s Genosha Island among the shelves: an ‘African Literature’ section

I work across various disciplines and art forms, but regardless of my output, everything starts as an attempt to write poetry. What poetry taught me, what poetry must be to exist, what it must sound like to mean anything, is a distinct voice. A poem is a vista, a glimpse into the poet’s world, into the thin, marginal and liminal corner that any point of view inhabits. This is how we each experience the world, and a poet tries to nail that singular knowing of life down with language.

My point of view, for the longest time, has been from without rather than within communities. Being an immigrant deemed it so. As I wrote and tried to establish myself within various literary communities, I grew conscious of Black British culture and history. As quickly as the term was used to describe my work, just as quickly did I refute it, because it was inaccurate. I am Nigerian, I held (and still hold) a Nigerian passport and did not know enough of Black Britishness to claim it as mine, or to be able to write about it with any authority.

When I began to work in and alongside Nigerian writers and audiences, I discovered to my surprise that neither was my Nigerian-hood secure. I was called an ‘oyinbo’ boy – a white boy. Although I had left before the full impact of the Nigerian identity could be imprinted on mine, I thought enough of it had rubbed off on me. I was mistaken. By their standards, I’d fallen short, and indeed there are holes in my knowing of Nigeria that no amount of reading or listening will fill.

I found myself in the gulf between two worlds. In those early days of writing, I spent a lot of time in bookshops, too poor to buy, but lapping up X-Men comics, thrilling at their attempts to fit within their immediate human societies, heartbroken at how catastrophically they failed, often sacrificing themselves in their failure. I would put the comics down and meditate on Mystique’s shapeshifting abilities, partially wishing they were mine. As I stared, I saw a metaphor for the Xavier Institute or Magneto’s Genosha Island among the shelves: an ‘African Literature’ section. Around it was everything else – normal literature, normal communities where regular humans or regular writings lived. I realised that, although I felt normal and wished to belong to the normal section, among regular humans, if I were to publish a book, it would be placed in the ‘African Literature’ section; the gulf between.

Of the 500 languages spoken in Nigeria, I only speak one: English. Most of the characters I write about, like myself, like the X-Men, tend to be caught between two worlds. No matter how hard I try, those apples never fall far from the tree. Their ‘beefs’ in life are my beefs. Most of the stories I write are set within Nigerian contexts, and most of the characters are Nigerian. However, my experience of the world and the same voice that governs the poetry I write, is couched in a universality that exceeds the Nigerian identity, the Black British one, or any particular nationality. The X-Men characters and their stories are so universal, so popular the world over because – as with my characters – they have basic primal motivations, needs, wants and concerns, as every human does.

However, more often than I care to recount, projects, plays, stories I have written or wished to create, have been questioned or declined with heartfelt, sincere and apologetic emails from managers or publishers explaining a lack of confidence in selling tickets or finding an audience for my work. I do not belittle those fears, they are legitimate, I just wish it wasn’t the case; I work regardless. The Nigerian in me is relentless, the Irish always fighting, and the Londoner hustling. But my artistic life could be much simpler if this battle was redundant.

What the X-Men fight about, what they have always fought for, is inclusivity. They want to simply ‘be’. In the bookshop, I imagined Cyclops’s laser beams, Storm’s tempests, Gambit’s charges, Beast’s muscular intellect and Jubilee’s strength thrown against the ‘African Literature’ section, just so they and I could live among the normal everything else.

For a more inclusive arts sector, ‘African Literature’ sections, and the various othering classifications, incarnations and parallels, must be utterly, utterly destroyed.

Inua Ellams will be speaking in the opening discussion at The Garage’s conference New Horizons: Towards a More Inclusive Arts Sector. Taking place on Tuesday 20 September, New Horizons is a provocative, proactive and practical event for leaders and doers across the arts sector. It is supported by Youth Music using public funding by the National Lottery through Arts Council England. Media Partner: ArtsProfessional.