Why Wales needs to catch up

The arts sector has a duty to challenge social injustice and promote equality and diversity, but Wales is getting left behind, warns Abdul Shayek. 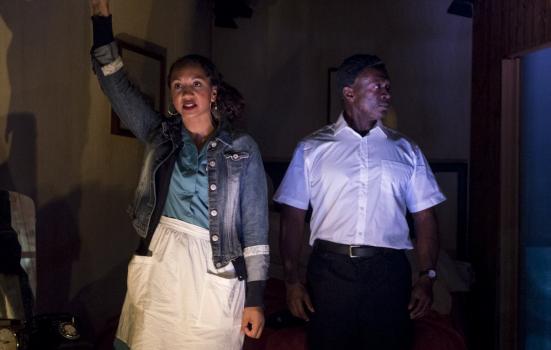 Performers in The Mountaintop

Over the past seven years I have had the privilege of getting to know Wales, working across the breadth and width of this beautiful country. I have been received warmly by the arts community and the general public and wanted to feel at home in this nation of amazing natural beauty.

However, issues around diversity across the arts and cultural sector at all levels became apparent early on. I would often arrive at shows in urban centres or rural settings and be the only person of colour. It was an issue that many organisations either ignored or didn’t have the resources, capacity, personnel or knowledge to deal with effectively.

In 2013 when I finished my contract with National Theatre Wales, and aware that the Arts Council of Wales funded only one minority-led organisation, I was keen to make a change. I set up a theatre company called Fio which in Latin means to belong or to become.

Five years on, the world is a dramatically different place. Globally, populist nationalism is taking precedence over fairness and equality, be it Trump, Brexit or the re-emergence of a vocal far right. The world has become hyper-connected and seemingly more aware, yet negative rhetoric about those who are different is regularly used to create barriers within communities. Why isn’t our sector challenging this more readily?

Fio’s local and national response in Wales to these global and local issues has had an impact. But we have also experienced significant resistance. When trying to convince venues to host Katori Hall’s The Mountaintop, one response by a leading theatre director and artistic director of a thriving Welsh venue, was: “This show will not work here as there just aren’t any brown faces other than the doctors.’’

I was taken aback by this comment, but in hindsight realised that while it was not driven by malice, it certainly came from a place of ignorance and a lack of understanding around issues related to race. Our tour went ahead successfully, and ironically the best-selling shows were in the rural venues and places with few or no brown faces.

The need to take action

Last summer this ignorance reared its ugly head in other parts of Welsh society, when racist incidents at Aberaeron Carnival and the Cardiff University Charity Gala made headlines. Yet there was very little in the way of any direct action or significant public response. In a meeting only last month with a prominent Welsh director, the following question was posed to me: “Do you think blacking up might become acceptable within the next ten years, with women playing male characters?’’

These incidents, aligned with the more recent issues raised around the Wales Theatre awards, whereby the organisers saw it fit to nominate two shows with questionable casting decisions for awards. All of this has left me asking whether Wales has a major issue around race which people aren’t willing or keen to engage with? A problem which politicians are ignoring, while the arts and cultural sector seems to be idly sitting by and at times being as much a part of the problem.

The response to an open letter signed by a significant number of creatives has thrust this issue into the spotlight and provides a great impetus for change. My firm belief is that we need to be interrogating and challenging our attitudes to these issues, and in turn to societal attitudes. To do this, we need to consider the following:

What has become clear is that although Wales is a friendly and warm nation, many people, including well-intentioned individuals, lack the language, knowledge and understanding of how to talk about race. The fact that significant numbers of people across Wales don’t ever encounter people of colour, or those who are different, often leaves them unaware of the offence they may be causing. But this cannot justify current attitudes, and similarly we cannot allow for those who are opposed to multiculturalism to use this lack of knowledge to their advantage.

The following quote from the open letter really captures how important this moment could prove to be for the Welsh cultural sector: “Globally in our industry, there is finally a significant appetite for change on this and other structural inequalities. We in Wales do not want to be left behind.”

We really do need to seize this moment in Wales, a moment for an honest and open exchange about the language, sensitivity and the imbalance of power that currently exists in our cultural ecology. It shouldn’t be an opportunity to attack or defend, but a safe space in keeping with Wales’ identity of being a fair, democratic and forward-thinking nation, a nation that understands and has fought against oppression. A space that enables those who attend to safely ask questions, learn and in turn implement this within their own practice and organisations.

A collective responsibility needs to be taken and this responsibility for change shouldn’t be placed on the shoulders of just artists of colour and those affected by this inequality. The larger, better-resourced organisations need to pick up the baton and enter into conversations with better informed, smaller organisations and individuals, but there needs to be a willingness to make meaningful change on all sides.

If organisations aren’t willing to enter this debate they should be held accountable. There should be serious consideration given to adopt elements of Arts Council England’s Creative Case for Diversity.

However optimistic we are, these issues will not be resolved with just short-term responses. The following long-term ideas require serious consideration:

We have to take risks and as a sector agree that the current status quo is unacceptable. Through this admission we will not only find new and interesting solutions, but also create significant societal change – not just in relation to race but equality in general.

The question often asked is whether we have an issue. We all know the answer, so a better question would be: “What are we all going to do about it?”

Yes it does, I agree with you but it all starts in schools. Drama has to be encouraged for all students and not suffer from the constraints of the so called 'National Curriculum'. All children love Drama and outdated educational views are not helping develop the multi cultural awareness needed in Wales if we are to be recognised as a nation who values the Arts and Culture.
An interesting read. The outcome of the Open Letters was equally interesting as the main target for the calling of censoring the shortlists was an opera company yet the main opera company and Wales flagship arts organisations firmly rejected its key assertion of ethnicity and casting, the 400 plus people at the Wales Theatre Awards called for working together than such division and most companies, as one would expect, kept their heads down to not get involved. The answer to the issues that are totally valid is to create quality theatre that attracts funding, audiences, bookings. This is equally valid, of course, to LGBT people, disabled people, the usual ABC1 social class, those not producing the usual Left and Left of Centre work. Fortunately, in the areas I am most interested, opera and dance, there is greater international ethnic diversity as singing is pretty universal and social barriers in those becoming singers are also slowly, slowly falling. Just look at WNO's current season although the number of Asian rather than UK, European, Australian and American singers booked in the UK is unbalanced. This has probably more to do with the links between opera companies than any other reasons. Dance seems pretty similar for, again, similar reasons. NTW has, if anything, swung the pendulum towards programming that in my humble opinion is of limited interest to a large (the majority?) of people in Wales and perhaps this is where the "people of colour" already has its organisation? NTW has demonstrated you do not need a venue (I am not sure why you would have a venue in one place to just to show/ present /such works?). Venues are sadly very much costs driven now and if venues are to be encouraged to "take chances" their funding needs to reflect this - and again this relates to all manner of works for all manner of groups and, for this conversation, diversity strands. The last point about the ACW being more representative of the type of the sector etc... is that arguing for reserved seats for people of colour, LGBT, different religions, different disabilities, gender, language, social class, geography of Wales, people from Wales, people from outside Wales etc.? As an equality worker within my trade union (and elsewhere) I have always tried to avoid ghetto politics (term used intentionally), equality strand silos, a hierarchy of equalities, tokenism, confrontation with the very people who are also working for the same aims, and, as a journalist, censorship. I do not speak for the Wales Theatre Awards which is the circa. 50 journalists who nominate and the dozen judges who select shortlists and winners based on those nominations. However, anecdotally, the messages I have received in its wake have included several significant companies and individuals who had previously not been financial supporters of the Awards asking how they can which means our future is secure and we can continue recognising quality in opera, dance and theatre. On a different but related subject, the Wales Critics Fund is also now financially secure thanks to support from across the industry in Wales and we are always looking for new voices to professionally mentor and give reviewing opportunities, feedback, and platforms for their work to be published if it at a good standard, which so far all the new critics we have supported have achieved. It is, however, really the work of venues and arts organisations to encourage reviewing and new reviewers but as this rarely happens, an apart from the really good have-a-go organisations out there, there is no professional, hands-on, mentoring - this Wales Critics Fund. So please help get the word out. More reviewers, more diversity in reviewing, more shows reviewed, more nominations for Wales Theatre Awards - cannot be a bad thing.

Why Wales needs to catch up