Why miss out on a financial lifeline?

Tax relief can be a lifeline for many arts organisations, so why are so many smaller theatre companies and independent producers missing out, asks Clara Giraud. 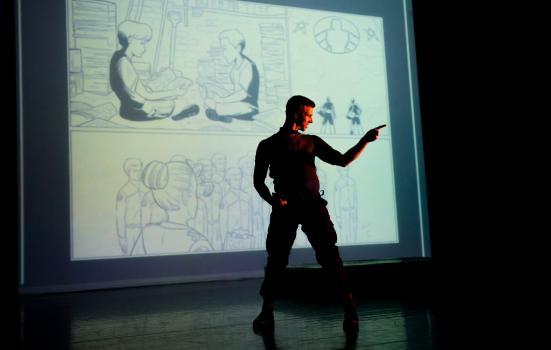 R.I.O.T. toured for a year and met the criteria for Theatre Tax Relief

Lately, I’ve had too many conversations with independent artists who are missing out on the benefits of Theatre Tax Relief (TTR). Introduced in 2014, TTR was implemented by HMRC to give the theatre sector a financial boost, allowing it to invest in more productions. Allegedly redistributing £25m to the theatre sector in the tax year 2015/16, and assuming growing numbers in the following years, it has the potential to have a huge impact.

The scheme enables theatre-producing organisations in the UK (they must be a registered company, though charitable status is not required) to claim back up to 25% of production costs for new theatrical productions. This refers to a wide range of dramatic productions, live performances and live streaming.

There will be some productions that don’t fit HMRC’s definitions, such as contemporary circus. The producers at Ockham’s Razor, for example, found themselves having to justify that their shows are scripted and dramatic, with defined roles with character names played by performers. This led them to retrospectively script a show in order to meet the criteria, which is bewildering when ballet and contemporary dance can claim TTR without making such a case.

As with many other schemes created by policy-makers with little experience of the sector, TTR has its labyrinth of absurd rules and complications.

Nonetheless, as an independent producer working with several theatre companies and artists, I quickly caught on to the scheme and discovered its benefits. Working with accountants, I helped identify qualifying projects, highlighted relevant expenditure on the books, and the accountants proceeded to make the claim as part of their overall services to us.

Months go by – you forget it’s even something in the pipeline – then one day a cheque comes through the post offering some financial relief. In 2016, my company PanicLab received enough tax relief to pay back significant debts it had accumulated taking a show to the Edinburgh Festival Fringe the year before. The show, called R.I.O.T., was a devised physical theatre performance that toured for over a year, easily meeting HMRC’s criteria.

The company continued to claim for projects after this, even though budgets were smaller (though research and development periods are considered as production costs, so these can grow to be quite significant). Yearly tax refunds enabled us to build up a reserve, which is an invaluable financial cushion to help us invest in new ideas and projects.

Once the accounting is out of the way, TTR can provide a much-needed breath of fresh air, some wiggle room for creativity and experimentation or some match funding for future projects. It’s a very rare opportunity for artists and organisations to have some hard cash that is not ring-fenced by a funder or investor.

Why, then, isn’t everyone doing it? One reason is that the relief applies only to registered companies, so independent artists and collectives are unfortunately left out. There is also a lack of information out there, and not enough advocacy encouraging very small scale and emerging companies to notice it as an option.

Many independent makers are put off by the red tape and the forms, ignoring the fact that paying an accountant a fee to process the paperwork is a hugely valuable investment with significant return. As little as a few hundred pounds towards accountancy support can make it possible to receive thousands back. TTR has been an incentive for artists and collectives to become companies, though this comes with a whole range of other obligations that may not be suitable depending on the circumstances.

TTR is also an opportunity for existing organisations to reach out to independent artists and collectives, to partner up to co-produce the work and enable a claim in the long term. Could this be another way to address the imbalance between established organisations and independent artists? Are co-commissioners and co-producers of work offering accounting support and claiming TTR as part of the working partnerships in place, sharing the costs and revenues these entail?

The cushion of tax refund would certainly lower the risk taken by many individuals and under-resourced organisations when supporting new creations. It is imperative that the theatre sector ensures that everyone benefits from this relief, that the impact is felt not just in the big production houses, but also on the ground by the theatre makers. TTR offers some financial relief to our very stretched sector, so why are we not making the most of it?

Clara Giraud is Co-Director of PanicLab, and Project Manager for Unlimited at Artsadmin.
paniclab.co.uk
weareunlimited.org.uk

Why miss out on a financial lifeline?