When the clocks turned back 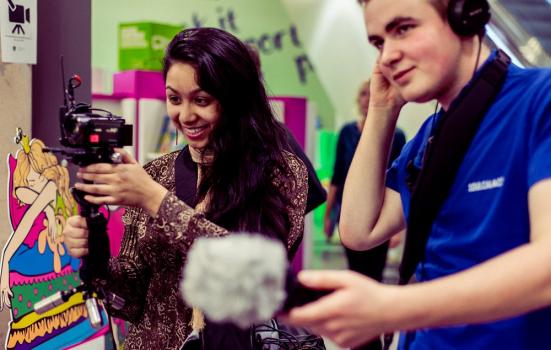 On Saturday 29 October in the nine hours leading up to midnight, young people in Telford, Cannock and Worcester took control of their local libraries, and streamed performances live to a worldwide audience. On the night that the clocks went back, and with Halloween looming, young people thought aloud about how we might make good use of the extra hour given to us.

Viewers from around the world were taken on behind-the-scenes tours and shown just how essential these spaces are for them to learn, escape and be places where questions can be asked

They played games, crept around in the dark and whispered manifestos. They also posed questions to the online audience, and as stories were submitted in response, they chose their favourites. A selection was read out, transcribed and then hidden among the books on the shelves, to be discovered by library users in the future.

Author Tony White performed a live reading to an invited audience in each library. He read from a new novella, entitled Zombies Ate My Library, which draws on ideas, conversations and off-cuts that had emerged during the development of the project. And, in the midnight hour, the young people spilled out of Worcester St. John’s library and into the back of a taxi. We then followed them home, where curled on the sofa they read the finale of Zombies Ate My Library, as much to each other as to the online audience.

Blast Theory was commissioned by Arts Connect, the Bridge organisation for the West Midlands, to take part in a creative planning process with members of the Association for School and Education Librarians (ASCEL). Together with the librarians who work with children and young people across six local authority library services, we designed and delivered A Place Free of Judgement, challenging the traditional view of the role of the library and exploring innovative ways of re-visioning them as cultural centres.

Tony White and I conducted a series of interactive workshops over the six months preceding the takeover. Through these sessions, the young people were encouraged to explore the very nature of writing and reading for young adults in a digitally connected world, to re-imagine libraries, storytelling and their place in the world. This was an opportunity for young people, many of whom had not engaged with artistic performance before, to shape a digitally integrated performance which told stories that were important to them.

The culmination of these workshops was an evening of live performances at three libraries: a mix of book readings, music, games and philosophical musings. Viewers from around the world were taken on behind-the-scenes tours and shown just how essential these spaces are for them to learn, escape and be places where questions can be asked. A further output of the project will be the publication of a book that will include the new short novella by Tony White.

The aim of the project was to raise the profile of libraries as places free of judgement where young people and their families can access a range of cultural experiences. We wanted to attract new audiences and build library membership by breaking through barriers to engagement – both geographical and psychological – and unite communities across the region in a way that is new, exciting and courageous.

Feedback from the young people who have participated has been positive. Tasha Williams, part of the group that took over Cannock Library, said: “Throughout the project I learnt so much from technical camera work, to creative writing skills, to performance and public speaking. My favourite part of the project was the unity of the group, it gave us time to come together and make something wonderful.”

The evaluation from the project will be disseminated through professional development for librarians and the arts and cultural sector. On Tuesday 21 February ASCEL, Blast Theory and Arts Connect will host a sharing event and book launch. Participants will share how the experience of working with artists and young people might be applied through other library services, as well as encouraging the arts and cultural sector to raise their ambitions for work with libraries.

This project has supported libraries in their ongoing effort to transform into venues associated with high-quality arts activities that build excellence in reading, writing and informal learning for children and young people and their families.

Anyone interested in attending the sharing event/book launch on Tuesday 21 February should email Susan Goodwin at susan.goodwin@wlv.ac.uk.

When the clocks turned back