Many artists find it difficult to sustain their practice early on in their careers. Nicola Sim shares the findings of her research into how arts organisations and funders can best support them. 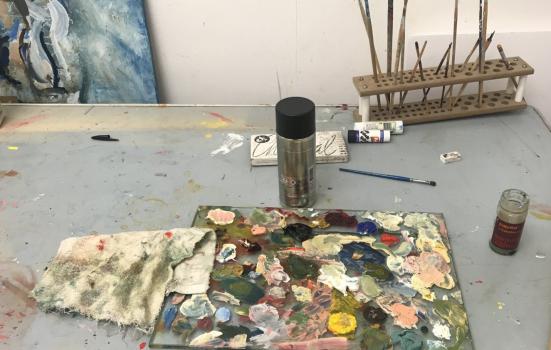 How can we support emerging artists? This was the question posed by Freelands Foundation, founded in 2015 with a mission to provide funding and opportunities in the visual arts sector.

I was enlisted in 2016 to produce a piece of research offering possible answers to this question, through conversations with artists, lecturers, funders and leaders from organisations dedicated to mentoring and championing artists. Alongside consultations with 15 selected interviewees, the inquiry involved an analysis of current opportunities targeting visual arts undergraduates, graduates and emerging artists.

The research helped to inform the development of a new initiative: the Freelands Artist Programme, which will see £1.5m distributed to organisations and emerging practitioners in regions across the UK. The findings of the research potentially also hold broader relevance for arts professionals and organisations looking to understand what artists need today, and how those needs might be met in a difficult funding climate.

It came as no surprise to hear in our discussions that the basic requirements boil down to three areas: time, space and money. It was also no revelation to hear evidence that artists are increasingly struggling to access these resources. But our interviewees aired deep concerns about the normalisation of unpaid opportunities in the art sector and the narrowing demographic profile of graduates able to maintain their practice.

Jon Opie, Deputy Director of the Jerwood Charitable Foundation, acknowledged the strain placed upon artists by the sector’s general lack of remuneration for creative labour: “Artists are not getting fair fees from commissions, from box office splits, for the work they’re putting in for commissions. They’re working long hours for no money. And I hear time and time again how difficult that is.”

Several participants also commented on negative public perceptions of artists as privileged, non-productive citizens, and the impact this has on the distribution of funding. Giving to artists is apparently not deemed a charitable activity, so providing funds directly to practitioners is legally complicated. These systematic hurdles, combined with the increasing costs associated with higher education, studio rent or city living, mean that less advantaged artists are frequently diverted from sustaining their practice.

Manick Govinda, then Head of Artists’ Advisory Services at Artsadmin, recalled his experience of mentoring artists for New Contemporaries: “I would say of the eight artists that I mentored, six or so were living back at home [with their parents]. And the ones that weren’t, were literally on minimum wage waitressing, and sadly had no time to think about making work – they were exhausted.”

While this type of evidence might suggest that the greatest area of need for artists is money, participants were keen to emphasise that even modest amounts of funding are important because they provide validation, and if connected to a cultural organisation, institutional recognition. Russell Martin, Director of Artquest, stressed that “small-scale interventions have the opportunity to be really transformative”.

Longer-term mentoring and peer support were also highlighted as holding equal value to financial support. Several interviewees spoke about a ‘drop-off’ point following university, where peer networks are often lost and opportunities are not so accessible.

Our website search of BA Fine Art courses revealed that only around 25% promoted post-graduation opportunities such as awards, bursaries, graduate studio space and residencies. The concentration of provision in London and lack of local authority arts funding in other regions of the UK were cited as further barriers to the development of artist communities and support structures beyond the capital.

So how might funders and support programmes make a difference in this climate and what are the principles of good funding practice?

Cultivating trusting and transparent relationships and allocating fair fees were seen to be vital to maintaining a healthy dynamic between organisations and artists. Several participants argued that funding should ideally be given with minimal constraints and delivery outcomes, as artists already tend to go above and beyond expectations without additional pressure.

There was also agreement that low-admin, accessible application processes were most desirable, and schemes that rewarded more than single recipients were most likely to attract emerging artists.

One of the biggest areas of debate revolved around when to target funding during the course of an artist’s career. Sarah Rowles, Director of Q-Art, felt strongly that graduating artists should be eligible for support straight away, so as not to exclude practitioners who can’t otherwise afford to prove themselves.

Stephen Morris, Chair of the Fenton Arts Trust, noted that the “proliferation of all forms of arts higher education is producing a large surplus of people who might have careers as artists, but also many who, in reality, will not”. As a consequence, the trust concentrates on supporting artists who have shown commitment to their practice in the years beyond graduation.

A final key theme to the conversations was the importance of creating and strengthening ecologies of support in regional localities. The concept of working with and through local institutions, which could help foster nascent art scenes and peer networks, was particularly appealing to many participants.

Drawing from this research and further consultation, Freelands Foundation has launched an initiative that will fund selected organisations to develop locally responsive programmes, supporting a total of 80 emerging artists over five years. The available funding includes provision for individual artists’ grants and budgets for an annual exhibition and symposium.

The ambition is to encourage a legacy of support and possibility for artists across the UK. The winning organisations will be announced later this year.