The concert-going experience is the same as it was over a century ago – it’s time to make some changes. David Taylor shares five suggestions. 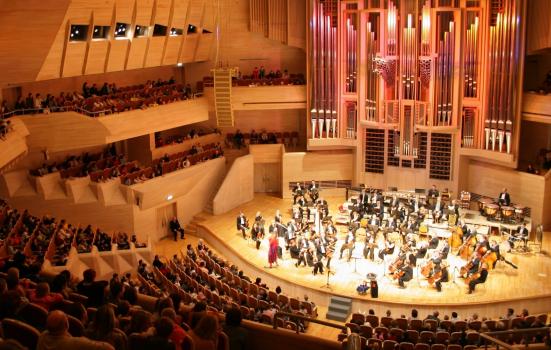 If you have a quick search on the internet for classical music, you’re never far away from criticisms that it’s elitist or that concerts are inaccessible and boring to most people. The format for concerts seems set in stone, something that has been handed down from generation to generation.

Yet this wasn’t always the case. Mozart expected people to talk during concerts and was delighted when the audience clapped during pieces at melodies they enjoyed. So here are five easy things that would improve classical concerts.

This one is going to split opinion. Social media is now an integral part of modern-day life. Its success stems from our natural desire to share experiences with each other. You can see people taking photos of a meal in restaurants, bands at Glastonbury, or joining in the conversation about a certain topic through hashtags. So why not allow classical music to benefit from this?

I put on a concert at Leeds Town Hall this summer, where we had a live hashtag feed displayed at the interval to show people’s comments and photos. Before the concert, we displayed a message on the screen and in the programme encouraging a social media etiquette – phones on silent and screen brightness on the lowest setting.

The result was so much more successful than we expected. We had people engaging with the concert, replying to strangers and sharing photos. This even continued for days afterwards, spreading the concert to people we never expected. And we didn’t have a single complaint about it being disruptive.

I’m a grown adult. OK, I still fail to fill in my tax return on time and get confused with the washing machine every now and then, but I think I’m a pretty successful adult. But when I go to a classical concert and queue for 15 minutes to buy an expensive drink, I’m not trusted to take my new prized possession into the concert hall (at the usual price of drinks at concerts, I’d hate to spill a single drop).

We are trusted with drinks at football matches, Wimbledon, gigs, shows in London’s West End and at the cinema, so why not at classical concerts? I also think that any suggestion of it being disruptive is nonsense. I can see a live stream of an opera at the cinema, surrounded by other opera lovers, and drink and eat to my heart’s content without disturbing anyone.

Not only would allowing drinks in the auditorium make the experience more fun, but it is bound to make some more money.

Now this one may be a little harder to implement. Sometimes I have been to concerts on my own as a last-minute decision, or just as friends were busy. I am stunned at how few people talk to each other at concerts. Any sports match or gig will have strangers talking to each other, getting to know one another and building new relationships.

I think it’s time we do the same at concerts. Talk to the person next to you, find out what they like about the concert or what bits they’re looking forward to and build a positive, friendly community.

For anyone who goes to a concert for the first time, it can seem like a daunting and almost hostile experience. This simple act of communicating with each other would make concerts more fun and help new people feel welcomed.

In my opinion this is long overdue. I truly believe that classical music is inherently accessible. But with concerts, it’s not just what we hear, but also what we see. An orchestra of people dressed in morning suits or tailcoats are too formal today. Classical music is always going to be called elitist if the musicians look like extras from Downton Abbey. Plus, they are boiling hot to play in. And I can’t think of a period in time where cream dinner jackets ever looked good. Just go simple: all black, smart and modern.

Wait… wait… just hold on a minute and bear with me on this one. Across all sectors, times of hardship stimulate change, innovation and entrepreneurship. It is very easy for orchestras to do projects that will open up funding possibilities, or indeed to become complacent and not develop as they rely on funding. And so they don’t innovate as they should.

Take the rebirth of ENO, for example. High-profile funding cuts and turmoil have been followed by an innovative Artistic Director (Daniel Kramer) and a more accessible season with big mainstream stars like Katherine Jenkins and Alfie Boe. I know that there have been criticisms for dumbing down, but I would argue that ENO is maintaining its integrity, broadening its appeal by selling more tickets and making opera accessible, which is what it was created to do).

Maybe a more entrepreneurial classical world would be of benefit to everyone and help to attract more people to concerts?

You may have noticed that I haven’t suggested changing one thing: the music. The music has never and will never be the problem. However, as times change, we must change the experience of how we listen to it.

I've seen recommendations such as these for years. I suspect some of your recommended changes are advisable irrespective of recent trends. I mean, everything can be improved upon, even when things are good. Almost all the recommendations I have seen for the last 10 years leave consumer tendencies out of the equation and result from judging superficial aspects of the experience: the venue (arduous dress codes, lack of social media, etc.), or they decry behavior (elitist arrogance, stuffy clapping traditions, must be quiet, silence your phone, etc.). Those things ARE uncool, for sure, so THEY must be the problem, right? That's how our brains work to solve problems. I suggest that classical concerts and music are not perceived as elite ENOUGH for the inconvenience and mental effort it takes to enjoy them. We really don't mind elitism. We all want to impress and be part of the same scene as our peers/friends (latest cocktails, clubs, tapered pants, contrasting tennis shoes, high heels, revealing silky blouse) and to be in-the-know (first to see the latest best movies, have seen the latest episode of whatever), demonstrating experienced tastes (what's the best sauvignon blanc or malbec or whisky or car or watch or phone or...) - even as we denounce elitism. What I call Elitism is just my insecurity judging YOUR conspicuous hipness being different than mine. Elitism is not the problem. Nor is the lack of social media or communing with my (sleeping) seat neighbor. Classical music is just not worth the effort. If classical music events were seen by 30-45-somethings as enhancing one's image, they'd feel it's worth the effort to try and get to know it (just like a Fitbit is perceived as worth the price despite its being inaccurate and frustrating). Compared to other music events, where we can talk, text, sing, walk around, get drinks, make out... classical music makes demands of us. It sounds boring and featureless in the background while we're talking or reading our phones. Classical music requires us to sit and pay attention to it (and even think about it). Even though we're all above average, that's just too much trouble for us, and not enough payoff.

How to... network as an introvert
Time for changes