A thirst for diversity

Frustrated by a shortage of touring opportunities for black and Asian theatre, Jatinder Verma and Jonathan Kennedy made it their mission to change the hearts and minds of artistic directors and inspire audiences across the country. 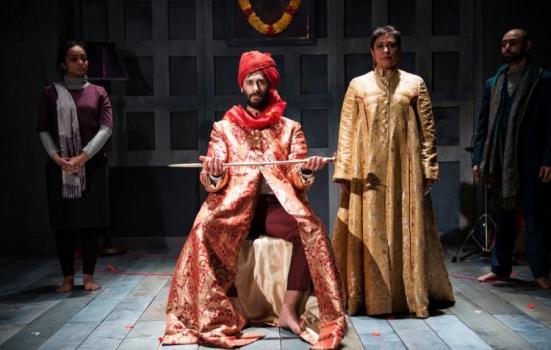 The genesis of Black Theatre Live lay in one of those seemingly interminable theatre conferences in 2014. We enthusiastically meet to find out what everyone else is up to around the country and invariably leave with an undertow of ennui.

The saving grace (if we can call it that) was that we returned to Tara Arts seething at the seemingly intractable issues surrounding the touring of black and Asian theatre. We began to imagine a theatre scene where at least two shows, on different scales, could each tour a variety of venues around the country every year.

We have been struck by the thirst for more, seeing significant demand from theatres and audiences for such tours

And so we went about securing partners in our imaginings. Thanks to the enthusiastic commitment of seven venues, as well as support from Arts Council England’s Strategic Touring Fund, Black Theatre Live was launched last year with Tara Arts as the lead partner.

Our mission was clear: to enlarge the repertoire available for venues and audiences and open opportunities for new creative talents in theatre to systematically address greater equality of opportunity for black and Asian touring companies.

As a national consortium, Black Theatre Live has set out to change the hearts and minds of artistic directors and inspire audiences across the country, by ensuring consistent annual touring of black and Asian theatre.

We enter the second year confident that the assumptions made by many theatres are hollow (unappealing to our audiences, we’ve had our black show this year, our town is not very diverse, and variations thereof). There is an appetite for more diverse shows – and they are attracting more audiences in significant numbers. Now more than ever, if theatre is to ‘hold the mirror up to life’ we must reflect all our society through the stories we tell and the wide diversity of audiences we reach.

The first two shows in 2015 were Macbeth, on the mid-scale, and ‘She Called Me Mother’, a new small-scale play by Michelle Inniss, with actor Cathy Tyson. Both shows attracted around 5% more ticket sales than the national average (66% according to the UK Theatre 2014 report), reaching over 11,700 people nationally.

The tours were not just limited to our consortium venues. Thanks to the collective support of the core venues, the tours extended to an additional 14 touring theatres across the country.

Alongside the commissioned tours, we currently profile over 90 black and Asian tours and 100 companies on our website to help artistic directors inform their programme choices. It also enables companies to develop a network of contacts and greater knowledge to help shape their touring.

The eight core theatres represent rural and urban locations, producing and receiving houses, ACE-funded and non-NPO theatres, mid and small-scale auditoriums, and most importantly, theatres that are located among predominantly white populations as well as those in diverse black and Asian communities.

The latter is vital, if we are to guard against a mentality of separatist theatre – black theatre for black audiences and ‘white’ theatre over ‘black’ theatre.

Importantly, the commissioned tours benefit from a comprehensive programme of marketing, audience development and outreach work to embed a sustainable model of practice nationally. Appreciating that one size cannot fit all, our audience development support responds to each Black Theatre Live venue, tour and audience.

New partnerships are building: The Queen’s Hall in Hexham is working with families living on the military barracks in Northumberland; and Derby Theatre is working with black and Asian women from across the city.

From this development work we have seen a real rise in new audiences to the venues (surveys indicate 29% of audiences in year 1), and nearly a quarter of all bookers were from the segments that we see as having a low propensity to engage in arts and culture.

Research to date undertaken with The Audience Agency shows that the visitors’ ethnicity varied from production to production: 16% of audiences surveyed for Macbeth were black, Asian or minority ethnic (BAME) and 26% for She Called Me Mother. These compare favourably to the national 14% BAME population (2011 Census plus The Audience Agency reports).

We have been struck by the thirst for more, seeing significant demand from theatres and audiences for such tours. Over the coming years, we expect to deepen relationships with our new audiences to ensure they return to the venues and continue to diversify the demography of those they reach.

We hope Black Theatre Live provides a model of the opportunities available when we dare to dream about expanding our repertoire and our audiences.

Exit interview: 'Theatre is diverse by its very nature'
A thirst for diversity