A springboard for change in Ukraine

An international collaboration is helping young people with disabilities in the Ukraine get involved in the performing arts and bringing communities together, writes Sylvia Harrison. 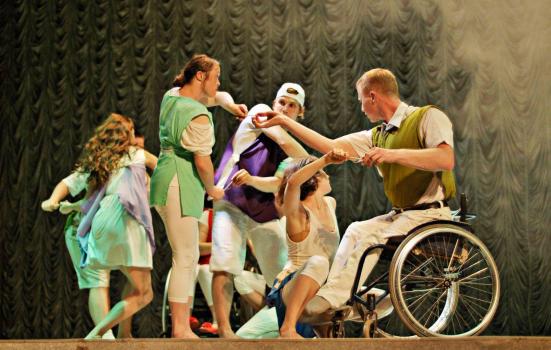 In 2015 I travelled to Ukraine for a partnership between Shelter+ in the Ukraine and the Roundhouse. The more time I spent there, the more I became aware of the problems faced by disabled young people in Kryviy Rih, the town where we were running the project.

The methodology Wolfgang used to run the workshop was hugely important to its success...

Many young disabled people in Ukraine face not only a lack of opportunity to engage in the performing arts, but also a lack of opportunity to integrate at all, particularly with other young people in their community. 2.7 million people (6%) are registered as disabled in Ukraine, with many facing difficulties and discrimination. Ten times as many children are in institutional care in Ukraine as in England and many young people with disabilities face negative attitudes as well as a prevailing viewthat the arts are not for them.

One mother told me: “The problem is that it’s not just the government, the schools, the hospital; it’s the fact that when I take my child to the park other children won’t play with her.”

There has been a big change in attitudes towards disabled people taking part in sport in Ukraine due to the country’s success at the Paralympics. Myself and my counterpart at Shelter+, Oleksander Romancha, were inspired by this, and decided to recreate this shift within arts and culture.

We teamed up with Becky Martin from the Lyric Hammersmith, Wolfgang Stange and Rosie Leak from Amici Dance Theatre Company and Ukrainian wheelchair dancer Ivan Zamiga to create Better Together.

Following consultation with the local community about what needed to change and what we could do to support that, we returned to Kryviy Rih a year after our first visit to deliver a week-long programme of work. The project brought together 40 professional and emerging disabled and non-disabled artists for a week of collaboration and performance-making.

We then performed to an audience of over 600 in the Kryviy Rih Palace of Culture – a space where disabled and non-disabled young people have never performed alongside each other before.

The methodology Wolfgang used to run the workshop was hugely important to its success. The group was expecting Wolfgang to issue introductions and for him to begin with an overview of everyone’s disability. But it didn’t happen that way.

Wolfgang firmly believes no one should be defined by their disability and that we should learn about one another as we go. So there were no rules or guidelines when the sessions started – they just began, without tutors explaining how things were going to happen.

As a result, they were really open and creative. Participants felt they had the freedom to get involved without fear of ‘getting things wrong’. It was a new experience for many of the group who were so used to having everything explained and often felt like they’re told what they can and can’t do. Everyone felt valued and they grew in confidence when their own ideas were accepted.

One young boy with learning difficulties became the rockstar he always dreamed of being and a young girl in a wheelchair was the lead in a romantic duet, a role she never imagined she would play. Young disabled people were the centre of positive attention and no one was defined by their disability.

Parents were also equipped with the skills and confidence to help their children engage in mainstream settings in future. One mother told us how her son was a different person since taking part, finally being accepted by his peers. The acceptance by other young people has had a profound impact on not only the young people involved but on their families too, and, in turn, we hope will affect positive and long-lasting change within their community.

But Better Together is about more than bringing together the community in Kryviy Rih. The performance will now tour to two cultural festivals in Ukraine, offering opportunities for all the young people involved and changing attitudes in the places where they perform.

We are also creating a toolkit for organisations across the country with guidance on how to make creative projects more integrated. This will truly be a springboard for change and a shift in attitudes towards people with disabilities.

Sylvia Harrison is a Project Manager at Roundhouse.
www.roundhouse.org.uk

The project is funded by Schering Stiftung in the framework of MitOst and the British Council, Ukraine.

A springboard for change in Ukraine